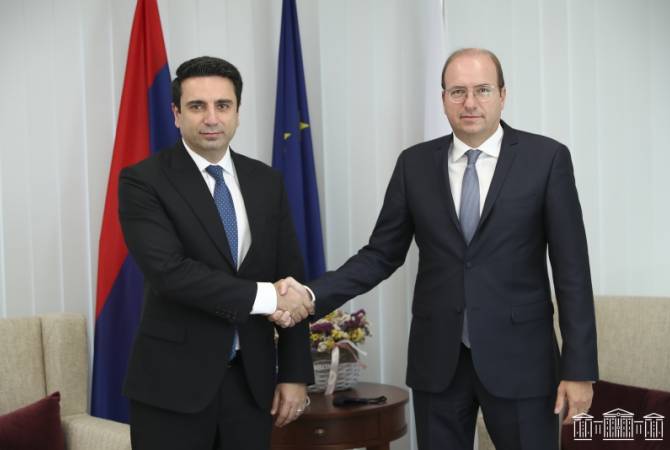 
YEREVAN, 25 OCTOBER, ARMENPRESS. In the framework of official visit to Cyprus the delegation headed by the President of the National Assembly of Armenia Alen Simonyan on October 25 met with the Minister of Defense of Cyprus Charalambos Petrides.

“During the meeting the sides noted the existence of mutual understanding and support between the two countries, particularly the effective cooperation in international structures on advancing the genocide prevention agenda was especially appreciated. Reference was made to the military-political dialogue between the defense ministries of Armenia and Cyprus, which is being implemented during meeting of bilateral and multilateral frameworks”, ARMENPRESS reports reads the message released by the National Assembly of Armenia.

Speaking about the Azerbaijani-Turkish military aggression against Artsakh Alen Simonyan expressed gratitude for the principled position of Cyprus and for supporting the people of Artsakh, highlighting the humanitarian and financial assistance of Cyprus to Armenians of Artsakh in 2020. The unanimously adopted resolution condemning the Azerbaijani aggression against Artsakh on October 9 was also mentioned.

The sided highlighted the effective implementation of opportunities in the format of Armenia-EU Comprehensive and Enhanced Partnership Agreement.