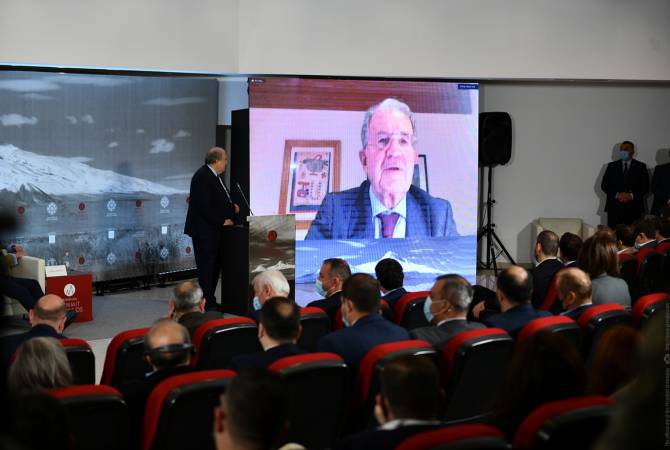 
YEREVAN, OCTOBER 23, ARMENPRESS. President of Armenia Armen Sarkissian held a talk with former Prime Minister of Italy, former President of the European Commission Romano Prodi during the Armenian Summit of Minds which launched today in the town of Dilijan, the Presidential Office said.

The speakers talked about the past and the present, in particular the ongoing geopolitical developments and global changes and the facts affecting geopolitics. They also discussed the prospects of the future.

“If we look at the whole world, the development is absolutely different like it was 30 years ago. Small states also fly and develop in a smart way. Those countries, which know their strong sides, also know how they can use that strong side for becoming more important in the world. I hope Armenia will also join that club of small countries (Singapore, Qatar, UAE) in the near future”, President Sarkissian said.

In turn Romano Prodi said that the current geopolitical changes force countries to make a choice.

“No one can be independent in the world. You have to choose, on which side you are. Try to understand where Armenia is. You have very good relations with Russia and the United States, but it will gradually become more complex. We as well. The world will become as such. It will become a whole hub of connection, dependency. We are globalizing”, the former Italian PM said.

Talking about Armenia and the Armenian people, he said: “Thanks God, there are Armenians also in my country, and I personally know many of them as a result of historical developments. Unfortunately, we can’t expect stability anymore, the future is going to be very mixed. It would be hard to guarantee stability. Although I personally think that you will have firmer relations with Europe thanks to culture, traditions and also the presence. With your presence you always bring your contribution to the development and stability in the European countries. As for geopolitics, Armenia has such a geographical position that you have to keep the balance. I am sure we will gradually, further approach Armenia and have an influence on the fate of Armenia. I am sure that those relations will develop and contribute to Armenia’s independence”.

Armenia is hosting the leading international Summit of Minds for the third time.

The Armenian Summit of Minds is taking place in the town of Dilijan, at the Training-Research Center of the Central Bank.

The agreement on holding the summit in Armenia was reached back in September 2018 when the President of Armenia was taking part in the annual Summit of Minds as a keynote speaker in the French city of Chamonix.

The slogan of this year’s Summit is “Global Transformations In A New Quantum World”.