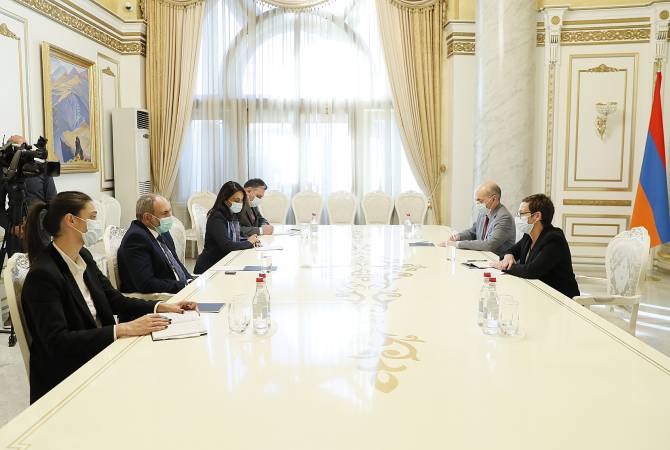 As ARMENPRESS was informed from the Office of the Prime Minister, Nikol Pashinyan welcomed the Ambassador and congratulated her on the appointment. “Much can be said about the privileged relations established between our countries, all with positive accentuation. When I think about the relations between France and Armenia and try to answer the question, what can we do in the context of those relations, I get an unequivocal answer that we must be able to strengthen our cooperation in the economic sphere, because in other spheres we have done everything or are on the way of doing everything.

And I think this is very important in terms of strengthening our political relations and making them more effective. I am glad to note that the President of the French Republic, my friend Emmanuel Macron, seems to also have the same idea," Nikol Pashinyan said.

The Prime Minister stressed the role of France in terms of the OSCE Minsk Group Co-chairmanship, the effectiveness of the Nagorno-Karabakh peace talks, and the settlement of the conflict. "Welcoming you once again, I hope that in the context of these issues, renewed intensity will be manifested as a result of your appointment; the rich agenda we had in the past will also be marked with new achievements," the Prime Minister said.

Ambassador Anne Louyot thanked the PM for the warm reception and said, “Armenia is not just a regular country for the French Ambassador. It is a very serious responsibility for me to be the Ambassador of France to Armenia, taking into account the long-term nature and intensity of our relations, as well as, Mr. Prime Minister, your personal relationship with the President of our country”, Anne Louyot said, conveying to the PM the warm greetings of Emmanuel Macron.

The Ambassador assured that during her activity she will do everything to give new impetus to the political and economic relations of our countries. Anne Louyot added that in coolaboration with the Government of the Republic of Armenia it is planned to develop a "road map" of joint actions and programs in the near future.

The Prime Minister emphasized that the Armenian Government is interested in the involvment of French companies particularly in various infrastructural programs. The interlocutors discussed issues related to Armenia-EU relations, including the implementation of the 2.6 billion euro program package for Armenia, cooperation within the framework of the Eastern Partnership program, and the continuous advancement of democratic reforms in our country.

The sides also exchanged views on the intensification of the negotiation process on the Nagorno Karabakh conflict, the importance of the forthcoming visit of the OSCE Minsk Group Co-Chairs to the region, and the processes taking place in the South Caucasus.