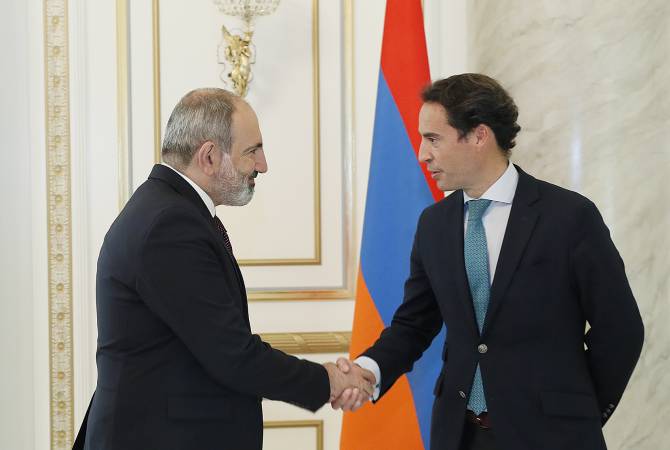 As ARMENPRESS was informed from the Office of the Prime Minister, PM Pashinyan congratulated Mr. Piriz on his appointment to the important post and expressed hope that his visit will provide an opportunity to discuss the situation in the South Caucasus region, assess the opportunities and problems of the Armenia-NATO partnership. Nikol Pashinyan noted that the situation in our region is rather tense, and Armenia is making efforts to manage it best. According to the Prime Minister of Armenia, there are problems in the region that are waiting for their solution. "The comprehensive settlement of the Nagorno Karabakh conflict is a priority for us, the opening of regional communications is also important," the PM said, expressing hope that it will be possible to achieve results in these areas.

Prime Minister Pashinyan highlighted the political cooperation with NATO and getting acquainted with the latter's ideas on further partnership.

Javier Colomina Píriz noted that NATO also attaches importance to the ongoing partnership with Armenia, and the purpose of his visit is to discuss issues and opportunities for further cooperation with Armenian partners, to assess the situation and prospects in the region. Mr. Piriz noted that NATO highly appreciates the activities of the Armenian peacekeepers in Kosovo, who carry out their mission at a high level. The NATO Secretary General's Special Representative added that the North Atlantic Treaty Organization attaches importance to the establishment and strengthening of peace and stability in the South Caucasus and is ready to contribute to solving this issue through cooperation with the countries of the region.

Prime Minister Pashinyan noted that the participation of Armenian peacekeepers in ensuring international security is important for Armenia and expressed confidence that they will continue their mission in the best possible way. The Prime Minister also referred to the processes taking place in our region, emphasizing that the issue of ensuring the return of Armenian captives held in Azerbaijan directly affects the regional situation. Nikol Pashinyan expressed hope that in this regard it will be possible to reach a solution in the near future.

During the meeting the sides exchanged views on Armenia-NATO partnership and further cooperation.