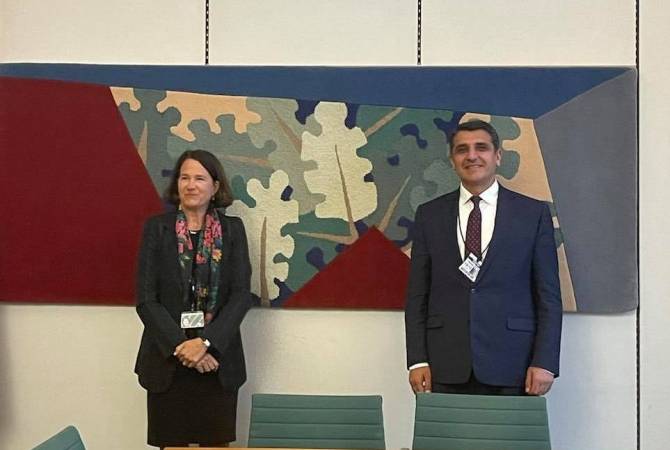 
YEREVAN, OCTOBER 21, ARMENPRESS. Armenia’s Ambassador to the United Kingdom Varuzhan Nersesyan met with Catherine West and James Murray, members of the Labor Party of the House of Commons and the UK-Armenia All-party parliamentary group, the Embassy of Armenia in the UK said in a statement on social media.

During the meeting, the Ambassador first thanked the MPs for their constant support to Armenia and Artsakh, especially during the 2020 war, and for voicing and supporting Armenia’s approaches in the UK Parliament. The Ambassador presented in detail the latest regional developments, Azerbaijan’s ongoing aggressive actions against Armenia, and the possibilities of resuming the negotiation process.

Varuzhan Nersesyan attached special importance to the issue of repatriation of POWs, who are kept in Azerbaijani prisons contrary to all international humanitarian norms. The Ambassador also presented the need to preserve the Armenian historical and cultural heritage of Artsakh, emphasizing the importance of expressing a clear position of international partners in this issue.

The parties also discussed the Turkish factor and the negative regional impact, which was vividly reflected in Turkey’s direct involvement in last year's war in Artsakh.

The Ambassador and the members of the UK House of Commons highlighted the development of the Armenian-British relations, emphasizing the role of parliamentary diplomacy in that process and the activation of ties between the parliaments of the two countries, the organization of mutual visits and cooperation on various issues.

19:30, 01.14.2022
Viewed 1672 times Russian MFA issues statement on the results of the meeting between the special representatives of Armenia, Turkey

10:38, 01.15.2022
Viewed 1546 times CCAF calls on French government to demand apology from Azeri authorities or else recall ambassador over Aliyev’s threats