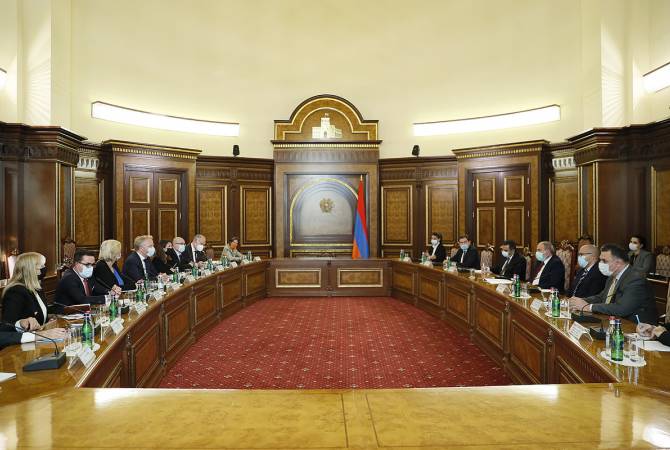 
YEREVAN, OCTOBER 19, ARMENPRESS. Today, Prime Minister Nikol Pashinyan received the  Head of the Rapporteur Group on Democracy of the Committee of Ministers of the Council of Europe (CoE), the Permanent Representative of Sweden to the CoE, Ambassador Mårten Ehnberg and the delegation led by him. and his delegation. The delegation consists of the Ambassadors of France, Russia, Switzerland, Finland, Estonia, Andorra, Iceland to the CoE and representatives of the Secretariat of the Council of Europe, ARMENPRESS was informed from the Office of the Prime Minister.

Greeting the CoE delegation, the PM said, “The Council of Europe has been one of our key partners in the field of democracy since 2000 and has accompanied us in virtually all of our reforms. I think we have concrete achievements in this difficult period, particularly in terms of democracy, and it is worth emphasizing especially here. Seemingly insurmountable problems were constantly registered regarding the quality of the elections, the reliability of the official results since the first days of our membership to the Council of Europe until 2018,  but, in fact, we can state that this problem has been overcome.

I would also like to emphasize that for the first time in the history of Armenia, elections have served as a tool to overcome the domestic political crisis, while in the past, elections have always been the cause of domestic political crisis, controversy and opposition. We are committed to the political course of democratic reforms, we will continue that path, and we are glad that we can count on the support of the Council of Europe on that path."

On behalf of the delegation, Mårten Ehnberg thanked the Prime Minister for the appreciation, emphasizing that the Council of Europe attaches importance to the partnership with Armenia. He noted that the delegation has had effective discussions with its Armenian partners, during the exchange of views the priorities for the effective implementation of the CoE-Armenia 2019-2022 Action Plan were recorded.

At the request of the representatives of the CoE delegation, the Prime Minister presented details on Armenia’s democratic agenda, speaking about reforms in the fields of anti-corruption, elections, freedom of speech, judiciary, penitentiaries, as well as other spheres. Nikol Pashinyan emphasized that the current results show that as a result of the reforms initiated by the Government, it has been possible to create effective control mechanisms in the mentioned directions. This process continues.

During the meeting, the Prime Minister answered a number of questions of the members of the CoE delegation. The questions were about overcoming the consequences of the war unleashed by Azerbaijan against Nagorno Karabakh, resolving humanitarian issues, ensuring peace and stability in the region, resumption of the negotiation process within the OSCE Minsk Group Co-Chairs, as well as Armenia's democratic development, importance of educational reform, strengthening of rule of law, prevention of domestic violence, promotion of state-civil society cooperation, improvement of the parliamentary system of government, etc.

Head of the Rapporteur Group on Democracy of the Committee of Ministers of the Council of Europe Mårten Ehnberg thanked the PM for the detailed reference, noting that the works testifying to Armenia's democratic progress will be presented during the discussion of the CoE-Armenia Action Plan 2019-2022 scheduled in January 2022.