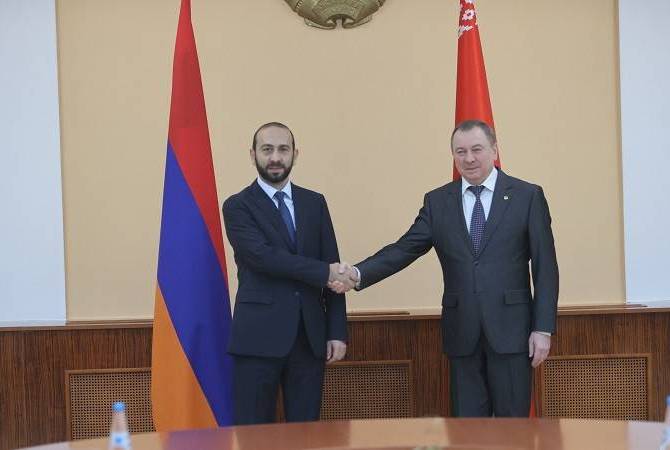 
YEREVAN, OCTOBER 15, ARMENPRESS. Foreign Minister of Armenia Ararat Mirzoyan met with his Belarusian counterpart Vladimir Makei in Minsk on October 15 on the sidelines of the session of the CIS Council of Foreign Ministers.

The Armenian foreign ministry reported that the two ministers discussed the Armenian-Belarusian cooperation agenda both at bilateral, multilateral formats and within the CSTO, EAEU and CIS.

In the context of further developing the relations, both sides highlighted conducting mutual visits at the highest level.

The ministers praised the results of the recent political consultations held between the two foreign ministries in Minsk.

The Armenian and Belarusian FMs emphasized the necessity of actions aimed at expanding the economic ties and trade turnover volumes, and in this context they attached importance to the role of the Armenian-Belarusian inter-governmental commission on economic cooperation. They highlighted high and information technologies, agriculture, food industry as areas of interest.

The meeting touched upon also the international and regional affairs.

Touching upon the Nagorno Karabakh conflict, the Armenian FM emphasized the importance of the lasting and comprehensive settlement of the conflict under the mandate of the OSCE Minsk Group Co-Chairmanship.