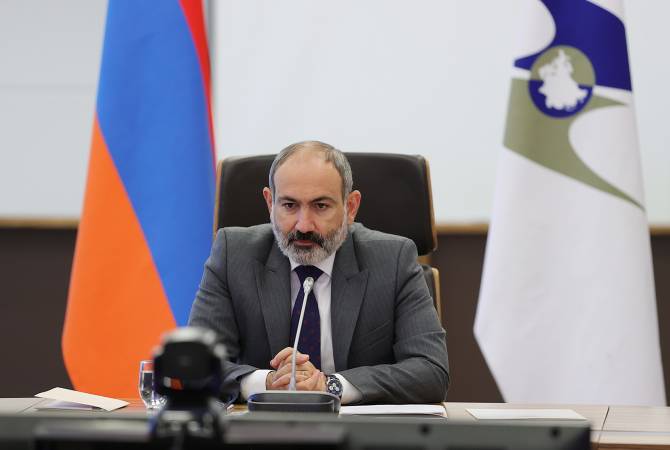 
YEREVAN, OCTOBER 14, ARMENPRESS. The development of common energy resource markets in the territory of the Eurasian Economic Union is a necessary pre-condition for the full utilization of the economic integration potential in the union, from which all member states will benefit in the long-term prospect, Armenian Prime Minister Nikol Pashinyan said during the October 14 online meeting of the Supreme Eurasian Economic Council.

Pashinyan thanked Belarus for organizing the session and welcomed the presidents of Uzbekistan and Cuba, who participated by virtue of having an observer status.

He expressed hope that disputed issues and development of the future agreement on the matter will be resolved in reasonable timeframes.

Pashinyan noted that eliminating the obstructions for mutual trade in the union is a priority.

“The implementation of existing agreements in this area will strengthen the foundations of the union’s activities, and the absence of obstacles within the union will raise not only mutual trust between member states, but will also increase competitiveness in external markets,” Pashinyan said, stressing that it is necessary to boost efforts for eliminating obstacles, harmonizing productive supply chains, increasing transit potential taking into account the interests of business communities and citizens’ rights of member states.

The Armenian PM expressed certainty that applying and developing digital technologies would contribute to this process.

PM Pashinyan said right now the union must also protect its internal markets from the negative effects related to economic pressure from third countries. “Armenia is ready to closely cooperate in direction of finding ways for developing a common approach in this issue,” he said.

Addressing global challenges, Pashinyan also spoke about climate change, which in his words is impacting also not only the economy but social processes. He called for partnership in developing measures to mitigate climate change consequences, encouraging the restoration of green spaces and adapting low emission-level economies.

In this context he highlighted the Eurasian Economic Commission’s work in the direction of developing an ecologically clean transportation. The Armenian PM asked the commission to jointly intensify the work with member states and involve business communities and scientific circles.