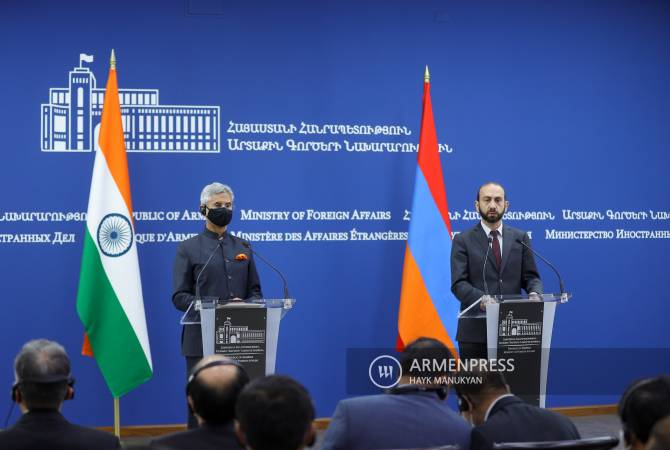 
YEREVAN, OCTOBER 13, ARMENPRESS. During the meeting with his Armenian counterpart in Yerevan, the Minister of Foreign Affairs of India Subrahmanyam Jaishankar proposed to use Iran’s Chabahar port as a hub of the North-South international transportation corridor.

At a press conference in Yerevan, the Indian FM said that the lack of direct communication obstructs the contacts between the peoples and the economic, trade exchange between India and Armenia. He emphasized that both India and Armenia are members of the North-South international transportation corridor, which, he added, has a prospect for communication development.

“I and Mirzoyan discussed the interest Armenia has for using the Chabahar port in Iran, which has been developed by India. We also proposed that the port is used as a hub of the international transportation corridor”, the Indian FM said.

In turn Armenian FM Ararat Mirzoyan said that they have discussed the issue of infrastructure in the region and the North-South transportation corridor with Mr. Jaishankar. “Both countries are interested in the fulfillment of this initiative. We have discussed the latest positive developments around the port, the issue of establishing a direct road communication between Armenia and India, as well as the future transit transfers from Armenia to Russia via Georgia and maybe to Europe via the Black Sea. This is the important component of our agenda”, the Armenian FM said.

As for the Persian Gulf-Black Sea initiative, Ararat Mirzoyan said they have recently discussed this issue with the Iranian side. According to him, the events around this program, this agreement are developing quite dynamically. “I hope in the nearest future we will have a signed agreement around this document”, the Armenian FM said.

11:29, 05.19.2022
3096 views U.S. recognizes role of population of Nagorno-Karabakh in deciding its future–Ambassador Tracy’s interview to ARMENPRESS