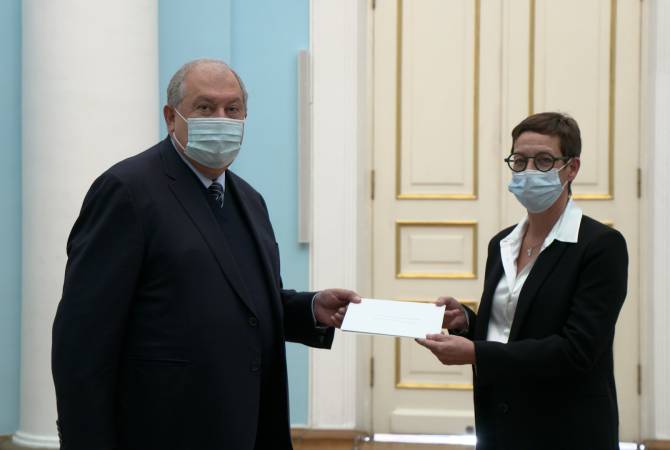 ‘’I am happy to represent France in a country, with which my country has unique relations. I will do everything to further develop bilateral relations’’, the newly appointed Ambassador said, conveying the warm greetings of French President Emmanuel Macron to President Sarkissian.

As ARMENPRESS was informed from the press service of the President’s Office, the President congratulated Anne Louyot on assuming the position, wished her success and hoped that by joint efforts the already rich agenda of the two countries will be enriched with new ideas and initiatives.

According to President Sarkissian, the friendship between Armenia and France coming from the depth of centuries, the unique relations between the two states, the high level political dialogue and mutual trust are a serious basis for the future development of the Armenian-French relations.

Armen Sarkissian noted that Armenia greatly appreciates the support and solidarity of French President Emmanuel Macron and the French people during the hard days for Armenia.

The interlocutors referred to different spheres of the Armenian-French cooperation. President Sarkissian assessed cooperation in modern technologies as promising. He presented ATOM (Advances Tomorrow) presidential initiative, which, being a future-oriented project, will be focused on the scientific-technological and educational development. There are already some preliminary agreements on cooperation with a number of French major technological companies. ‘’Armenia, with the support of France, can establish the locomotives for the future, which are technological locomotives’’, the President said.

The sides also spoke about the implementation of ambitious programs aimed at expanding cooperation in the fields of education, culture and healthcare, through which, as the Ambassador noted, the French side is ready to invest its experience in Armenia.