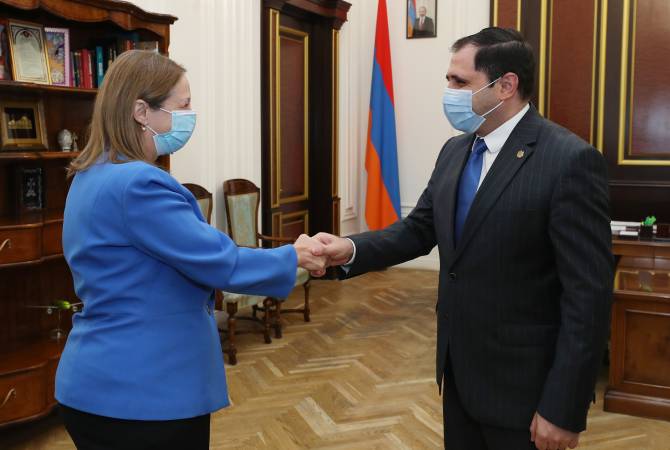 As ARMENPRESS was informed from the Office of the Prime Minister, greeting the Ambassador, the Deputy Prime Minister praised the active and effective cooperation of the previous period. In parallel with the development of Armenian-US relations, Suren Papikyan also highlighted the US role within the framework of the OSCE Minsk Group. He highlighted the importance of pushing the economic agenda in bilateral relations, emphasizing the usefulness of US involvement in various areas, including infrastructure development, water management, energy, particularly green energy production. The Deputy Prime Minister stressed that the efforts of the United States in the development of the mentioned spheres are commendable and expressed hope that the support will be continuous.

US Ambassador Lynne Tracey congratulated Suren Papikyan on assuming the post of the Deputy Prime Minister of Armenia, expressing confidence that in the new position the effective cooperation will continue and expand.

The parties discussed the reforms in the field of justice, the establishment of the patrol service, the prospects for the development of the justice system and infrastructure. The Deputy Prime Minister presented the results of his visit to Nubarashen penitentiary yesterday, highlighting the issue of improving the infrastructure of penitentiaries and the conditions of detention of convicts.

The sides touched upon the coronavirus pandemic and issues of overcoming its consequences. Given the impact of the latter on both human life and public health, as well as the economies of states, the importance of vaccine accessibility and vaccination in the context of opening borders and easing travel restrictions was emphasized. It was stressed that joint efforts in this direction will yield only positive results.

The parties also touched upon the process of administrative-territorial reforms in Armenia, in connection with which Deputy Prime Minister Suren Papikyan thanked for the support provided within the framework of the USAID, expressing hope that the assistance will get new quality, as it contributes to the socio-economic development of communities.

During the conversation, the ways to ensure a healthy environment for international investments in Armenia, anti-corruption reforms, ensuring a fair economic and competitive field were discussed. The problems facing the mining industry were addressed, with the emphasis on environmental risk management, socio-economic development of the surrounding communities and investment guarantees.

The situation over the Goris-Kapan road was also discussed. The Deputy Prime Minister spoke about the steps currently being taken to build alternative roads. According to him, in the coming days it is planned to complete the asphalting of the 44 km new road, which will be followed by the laying of a new layer of asphalt on the 17 km section.

Suren Papikyan also informed about the construction of a new 18 km road in the Tatev-Aghvan section, referring to the construction of bypass roads in the direction of 4 villages, which are planned to be finalized in the spring of 2022. The Deputy Prime Minister said that the construction works of the Sisian-Kajaran road section of the North-South highway have already kicked off.