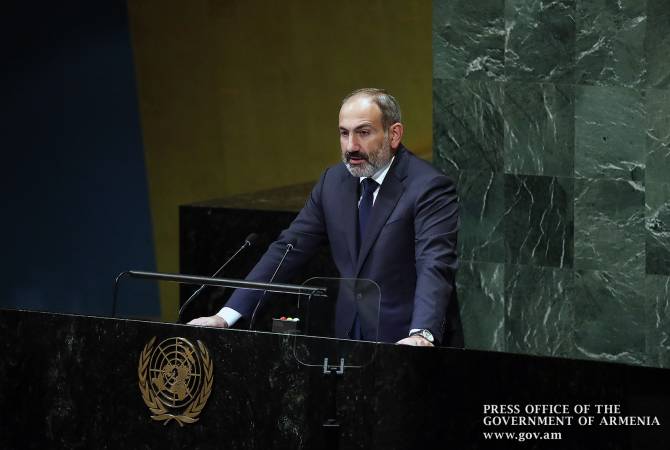 
YEREVAN, SEPTEMBER 24, ARMENPRESS. Addressing the 76th session of the UN General Assembly, the Prime Minister of the Republic of Armenia Nikol Pashinyan spoke about the violations of the ceasefire by Azerbaijan, the holding some dozens citizens of Armenia in captivity and torturing them, and the aggressive statements against Armenia and the Armenian people. ARMENPRESS reports the Armenian PM said that incidents take place almost every day, the aim of which is to delegitimize the peace agenda, and not only to deepen the atmosphere of hostility, but also to make it more systematic.

‘’The ceasefire violations, the aggressive and insulting statements addressed to Armenia and the Armenian people continuously escalate the situation’’, Pashinyan said.

According to the PM, the fact that contrary to Article 8 of the November 9 statement, Azerbaijan not only still holds several dozen citizens of the Republic of Armenia in captivity, but also sentenced many of them to 6 to 20 years imprisonment on trumped-up charges is and action against peace. ‘’In addition, there are citizens whose captivity has not yet been confirmed by Azerbaijan, although there is clear evidence that they are being held captive. This becomes even more unacceptable against the background that in the fall of 2020, Azerbaijani users posted videos of the capture of some Armenian soldiers, and later the decapitated or shot bodies of those soldiers were discovered. We have irrefutable evidence about the torture of our captives’’, Pashinyan emphasized.

According to Nikol Pashinyan, an outrageous example of the deepening of the atmosphere of hostility is the opening if the so-called trophy park in Baku, where Azerbaijani schoolchildren are taken on excursions to watch the mannequins of captured, killed or bleeding Armenian soldiers.

‘’These and other steps are taken to demonstrate the impossibility of peace in our region, but we will consistently advance that agenda by using every opportunity and creating new opportunities to open an era of peace for our region’’, Pashinyan said.