Armenian FM highlights entry opportunity of intl. organizations to Artsakh in a meeting with CoE Secretary-General 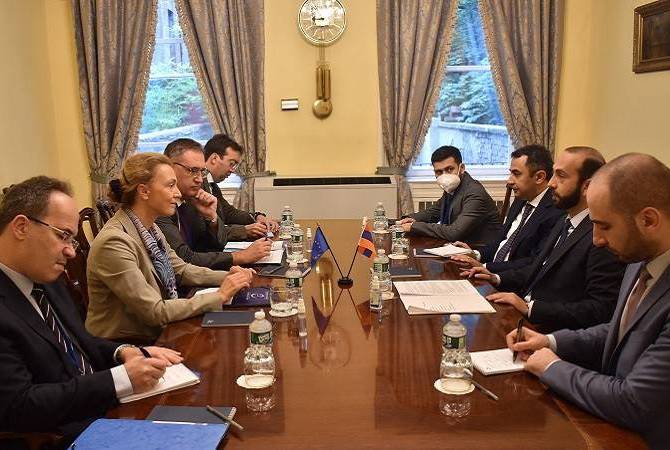 
YEREVAN, SEPTEMBER 23, ARMENPRESS. Armenian Foreign Minister Ararat Mirzoyan met with Secretary General of the Council of Europe Marija Pejčinović Burić within the framework of the 76th session of the UN General Assembly.

As ARMENPRESS was informed from the MFA Armenia, welcoming the Secretary General of the Council of Europe, Minister Mirzoyan expressed satisfaction with the multi-layered cooperation with the organization, noting that the Council of Europe remains one of Armenia’s most important partners in the process of democratic reforms, rule of law and protection of human rights. Marija Pejčinović Burić congratulated Armenia on holding parliamentary elections in accordance with democratic standards.

Touching upon the aggression unleashed by Azerbaijan against Artsakh and the settlement of the Karabakh conflict, the Minister praised the statements and calls made by various bodies of the Council of Europe, including the Secretary General, for ending hostilities and eliminating the humanitarian consequences of the war.

Ararat Mirzoyan emphasized that Azerbaijan still holds Armenian prisoners of war in captivity, which is a violation of international humanitarian law, as well as its obligations under the trilateral declaration.

Minister Mirzoyan also stressed the need for ensuring the smooth entry of international organizations, in particular the competent bodies of the Council of Europe, to Artsakh.

During the meeting, issues related to the Council of Europe Action Plan for Armenia 2019-2022 were also discussed.