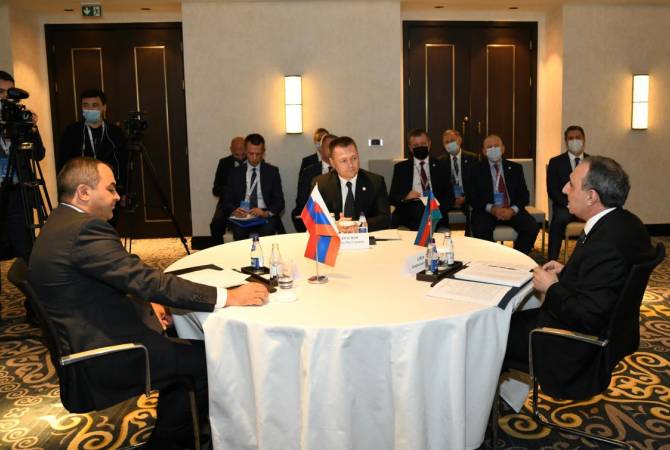 
YEREVAN, SEPTEMBER 23, ARMENPRESS. The trilateral meeting of the Prosecutors General of Armenia, Russia and Azerbaijan – Artur Davtyan, Igor Krasnov and Kamran Aliyev, was held in the Kazakh capital of Nur-Sultan, during which they discussed issues relating to Nagorno Karabakh, the Russian Prosecutor General’s Office said.

During the meeting the Russian Prosecutor General highlighted the efficiency of the trilateral format and recorded the major results of the works carried out for strengthening the legality in Nagorno Karabakh and stabilizing people’s life in the past 9 months.

The Russian Prosecutor General highlighted the ease of tension among the people of the region. He called on to more intensively use the opportunity of applying to the Russian military prosecutors in Nagorno Karabakh as a way of exchange of experience, as well as for reporting about the violations and continuing the works on returning the citizens to the homeland.

Igor Krasnov thanked his Armenian and Azerbaijan counterparts for the constructive cooperation and for achieving peace and stability.

The positive level of partnership in the search operations for missing in action was emphasized.

The sides agreed to continue the search operations.

The Armenian, Russian and Azerbaijani prosecutors general discussed the implementation of the statements signed by the leaders of their countries.

The Armenian and Azerbaijani prosecutors general thanked the Russian counterpart for the efforts aimed at fulfilling the humanitarian aspects of the 2020 November 10 statement on the ceasefire in Nagorno Karabakh.