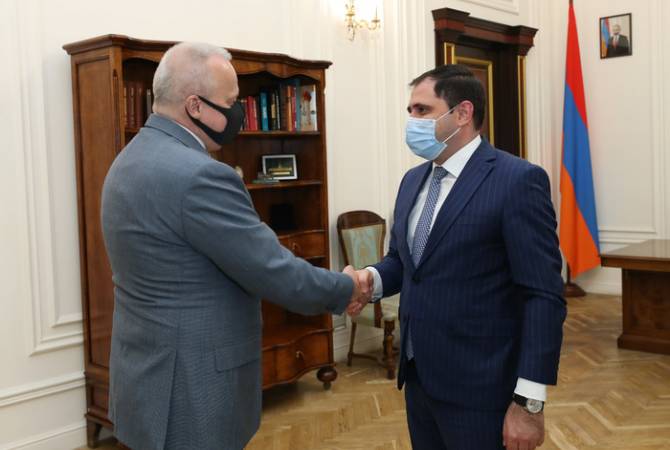 At the meeting Mr. Papikyan stated that the Armenian-Russian relations are at a high level, expressing confidence that the productive cooperation will continue.

Suren Papikyan congratulated the Russian Ambassador on the holding of the State Duma elections, noting that they create new preconditions for the implementation of programs and ideas. During the talk the sides highlighted the cooperation of the Armenian Parliament and the Russian State Duma aimed at deepening and strengthening the bilateral relations.

The Russian Ambassador highly appreciated the previous cooperation with Suren Papikyan, noting that a good experience has been accumulated and based on this broad preconditions have been created for implementation of upcoming programs. He expressed the readiness of the Russian side to conduct cooperation in all areas.

The officials then continued discussing the development prospects of the Armenian-Russian relations, in particular in the fields of security, defense, energy, infrastructure, new technologies and entrepreneurship. They touched upon the operation of the South Caucasian Railway, highlighting its importance for Armenia’s economic development.

The Armenian and Russian officials also discussed the productive cooperation in energy sector. Deputy Prime Minister Papikyan said the latter is of strategic importance for Armenia, and the comprehensive development of that sector is vital for the implementation of the government’s action plan. In this context they discussed expanding the cooperation with Rosatom.

As for the unblocking of transportation communications in the region, Suren Papikyan highlighted Russia’s key and productive role both within the trilateral format and the OSCE Minsk Group.

The situation on Armenia’s Goris-Kapan highway was also discussed. They emphasized Russia’s important and constructive role in reduction of tension and finding solutions to the problems.