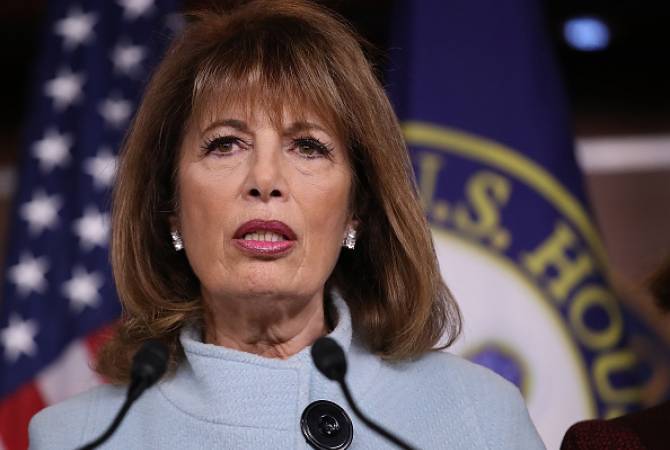 “It's almost two years ago to the day when I last visited Armenia and I was deeply moved by the incredible warmth, resilience, and hospitality of the American people in our homeland. I was especially impressed by the bright young people that I met and who will no doubt to find Armenia's next chapter.

They are brilliant inspiring and capable, and I expect great things from them. One only needs to look to Armenia's parliament where over 1/3 of the 132 parliamentarians are first time public officeholders. To see the younger generation hard at work to change their country for the better is really terrific. Armenians also understand that woman's equality and contributions are key to a peaceful and prosperous democracy. Women make up approximately 25% of the Armenian parliament and the percentage of women political candidates has increased by 17% since 2012.

In fact enshrined in the constitution of Armenia is the guarantee of gender equality between men and women, something that the United States still does not have in its constitution some 233 years after its ratification.

We in the United States could certainly learn a thing or two about representative democracy from Armenia. Armenia's democratic progress is even more striking given the difficulty and painful history it arises from, as well as last year's tragic war in Artsakh. The violence last fall caused an appalling loss of life and displaced nearly 100,000 people from their homes.

I was proud to lead the effort in the House of Representatives this year to include $50 million in appropriations for humanitarian assistance to Armenia to help rebuild and $2 million to fund the lifesaving humanitarian demining program in Artsakh.

The people of that region deserve to live work and play without fear of aggression and the deadly aftereffects of war. Despite these grave threats and challenges the Armenian people continue to make great strides in bolstering democracy and strengthening the rule of law. Armenia's progress as a testament to its people and to its leaders who have guided it through this transformation with compassion and determination.

So Happy Independence Day Armenia! I will be celebrating with you and looking forward to a time when I can return once again to experience the wonderful hospitality in our beautiful country.

I know that the future of Armenia is bright and by working together we can ensure peace and prosperity for Armenia and the United States, as we further strengthen our unshakeable bond”, the Congresswoman said in her message.