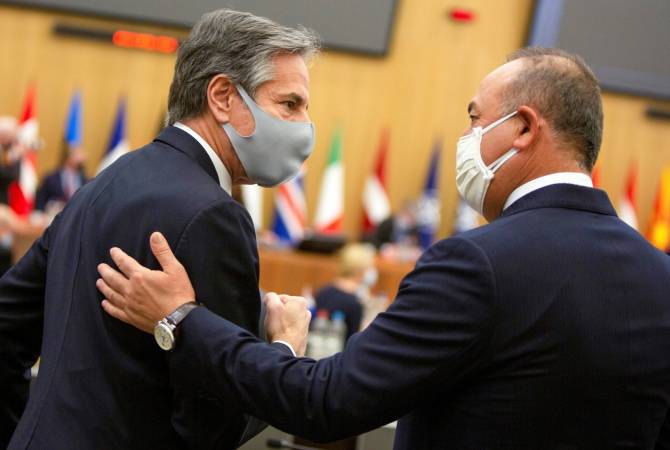 
YEREVAN, SEPTEMBER 22, ARMENPRESS. U.S. Secretary of State Anthony Blinken and Turkish Foreign Minister Mevlut Cavusoglu discussed the situation in Nagorno Karabakh during their meeting on the sidelines of the UN General Assembly, a senior official of the State Department told reporters.

The meeting lasted for about an hour.

“They discussed Afghanistan at length.  They also talked about Syria, and they had a relatively long conversation about the Caucasus – Armenia, Azerbaijan, Nagorno Karabakh”, the State Department official said.

“The U.S. has tried to be helpful in supporting a peace and reconciliation conversation between the two of them.  We participated in a swap of – we midwifed a swap of some demining maps that the Armenians turned over to the Azerbaijanis in the disputed territory for the release of some detainees.

So the question now becomes whether, with U.S. support, with other Minsk Group countries’ support, with Turkey’s support, we can do more to facilitate a de-escalation of tensions between the two, both along the border, with regard to remaining detainees, with regard to remaining mines, and then take some – see them – help them take some small steps which might lay the path towards a larger peace and reconciliation process.

So the Secretary made clear to Turkey, which has been very much involved in this and is a neighbor, that we are prepared to be helpful if we can be.  We are also at a level below the Secretary having bilateral meetings with the Armenians and the Azerbaijanis this week and making the same offer there”, he said.