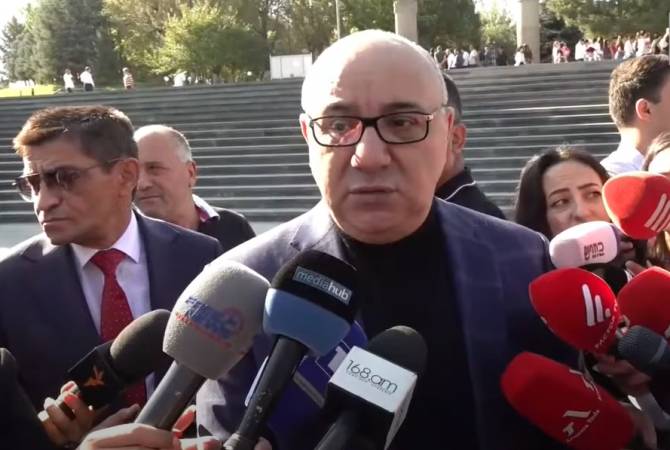 
YEREVAN, SEPTEMBER 21, ARMENPRESS. The Armenian authorities have already made the “positive steps” in the direction of normalizing the Armenian-Turkish relations by including the agenda of peace and the issue of normalizing ties with Turkey in the government action plan, ruling Civil Contract party lawmaker Gurgen Arsenyan told reporters in response to Turkish President Recep Tayyip Erdogan’s statement that the Georgian prime minister conveyed to him Armenian Prime Minister Nikol Pashinyan’s offer to meet.

“I was not present during the private conversation of the Armenian Prime Minister and the Georgian Prime Minister, but I want to remind you the following document called the Armenian Government Action Plan, which was debated and approved by parliament. In the foreign policy section of this document it is clearly noted that Armenia is including the issue of peace in its agenda. Our opponents of discussion of the peace issue are our neighbors, with whom we either don’t have any relations at all, or have tense, hostile relations. In order to serve the political agenda and make the Armenian security environment more stable and understandable the issue must naturally be discussed with the entities from whom that danger exists,” Arsenyan said.

Arsenyan says he believes that in terms of serving its interests Armenia should implement possible actions “with the volume which wouldn’t harm our country and doesn’t allow for having negative negotiating positions from the beginning.”

Speaking on Erdogan’s statement that parallel to preparing for talks Armenia should make positive steps, MP Arsenyan reiterated that Armenia has already made positive steps.

“We’ve included the agenda of peace in our government action plan. This is a highly important publication on our intentions to the whole world that we are placing in the peace agenda. Processes and steps stem from the documentation part of the peace agenda, which will be discussed and done by the bodies in charge, pursuant to Armenia’s security interests,” he said.