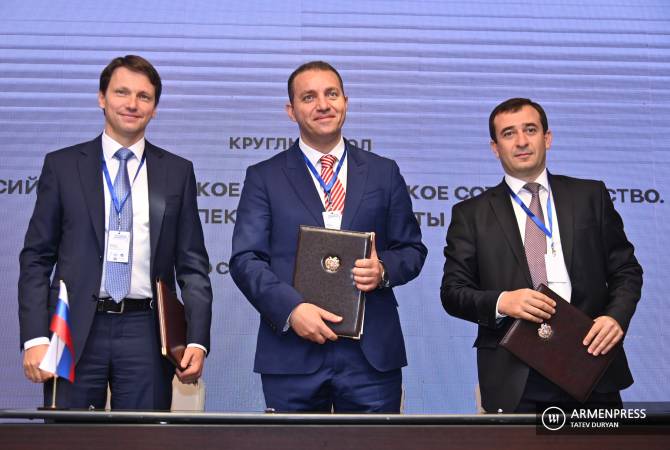 
YEREVAN, SEPTEMBER 20, ARMENPRESS. Armenia and Russia are creating a new platform for working on various programs. A cooperation agreement was signed between the Ministry of Economy of Armenia, the Russian State Development Corporation (ВЭБ.РФ) and the Development and Investments Corporation of Armenia. ARMENPRESS reports the agreement was signed in the sidelines of ‘’Armenia-Russia economic cooperation: Promising projects’’ event. Minister of Economy of Armenia Vahan Kerobyan stressed that this is a strong framework agreement on Armenian-Russian cooperation in the field of financing development programs.

"After this, we expect that when new programs appear, it will be easier for us to agree on the sources of  funding with such a powerful financial partner as the Russian State Development Corporation," the Minister said.

The Vice-President of the Russian State Development Corporation Daniel Algulyan noted that the corporation, as a state organization, has been cooperating with Armenia for many years.

‘’We have already implemented a number of projects. They were implemented on a separate, individual basis. At present we want to create a systemic basis for our cooperation with Armenia. Armenia is a very important economic partner for us in the framework of the Eurasian integration process. That is why the creation of such an integrated approach to cooperation will undoubtedly contribute to the growth of our trade turnover and investment’’, he said.

A platform is being set up under the agreement, as a result of which the parties will cooperate more closely together. Algulyan added that there are already a lot of ideas about what they should cooperate on. He spoke about the urban economy and its development.

Algulyan pointed out how Moscow has been developing in recent years.

"Russia has a lot of experience in urban development programs, we will be happy to share it," he said.

A cooperation agreement was also signed between ‘’Imagine HUB by Soft’’ and Skolkovo Foundation, a non-profit organization. The Minister of Economy of the Republic of Armenia Vahan Kerobyan said that the agreement on establishing such cooperation was reached between him and the director of Skolkovo two months ago in Yekaterinburg.