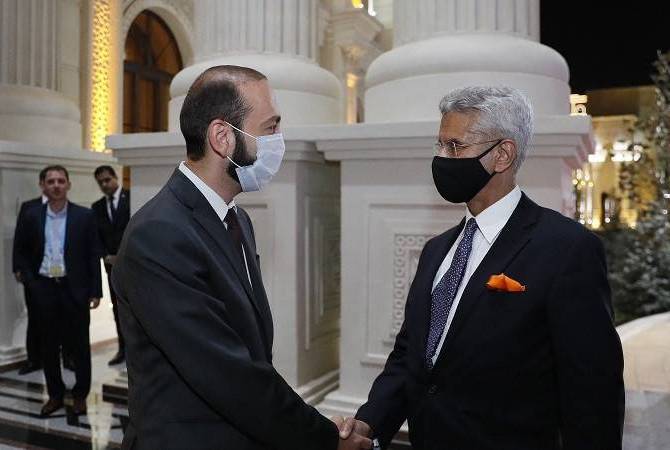 The two ministers discussed a wide range of issues relating to the bilateral agenda, praising the high level of the Armenian-Indian traditional warm relations which are based on close ties. Both expressed readiness to raise the cooperation to a qualitatively new level.

The officials agreed to start content discussions about the cooperation over concrete projects in different areas. In this context they emphasized the need for intensifying the high-level mutual visits.

The Armenian and Indian Foreign Ministers also highly valued the partnership of the two countries within international organizations.

The sides also discussed the ongoing developments around the North-South international transportation corridor.

The Armenian and Indian FMs also touched upon the regional and international security affairs. FM Mirzoyan introduced his Indian counterpart on the current situation in Armenia caused by the recent illegal incursion of the Azerbaijani armed forces into Armenia’s sovereign territory. In this context the minister highly appreciated India’s principled position and constant support to the peaceful and comprehensive settlement of the Karabakh conflict within the frames of the OSCE Minsk Group Co-Chairmanship. Minister Mirzoyan reaffirmed Armenia’s position on supporting India over Jammu and Kashmir matter.

The officials also discussed the situation in Afghanistan.

Their meeting took place in Tajikistan’s capital Dushanbe on the sidelines of the CSTO summits.