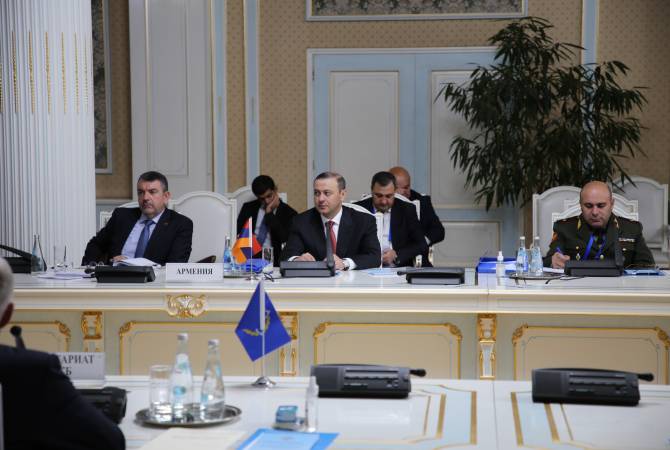 
YEREVAN, SEPTEMBER 15, ARMENPRESS. Secretary of the Security Council of Armenia Armen Grigoryan participated in the joint session of the CSTO foreign, defense ministers and secretaries of Security Council in Tajikistan’s capital Dushanbe, touching upon Armenia’s upcoming chairmanship at the CSTO and the country’s priorities.

In his speech Armen Grigoryan presented the ongoing developments in the Caucasian region, drawing the attention of the session participants on the latest developments in the Artsakh issue. He stated that Azerbaijan continues demonstrating an unconstructive approach and still refuses to return the Armenian prisoners of war and other persons held.

Commenting on the policy run by Azerbaijan, Armen Grigoryan said that policy is of an obvious provocative nature, in particular reminding the recent illegal incursion of the Azerbaijani armed forces into Armenia’s sovereign territories. He expressed hope that the condemnation of any encroachment against the sovereign territory of a country and the united position of the CSTO member states would have a sobering effect over the matter.

According to Armen Grigoryan, despite those challenges the Artsakh issue is waiting for its political solution, and in this context he highlighted the importance of resuming the peace process in the format of the OSCE Minsk Group Co-Chairmanship. Mr. Grigoryan hoped that the CSTO states will also support the efforts of the Co-Chairs.

As for Armenia’s upcoming chairmanship priorities in the CSTO, the Secretary of the Security Council said Armenia attaches importance to the continuation of works aimed at forming common approaches by the CSTO states over the agenda of regional and international importance, which, he added, would take into account the interests of the member states.