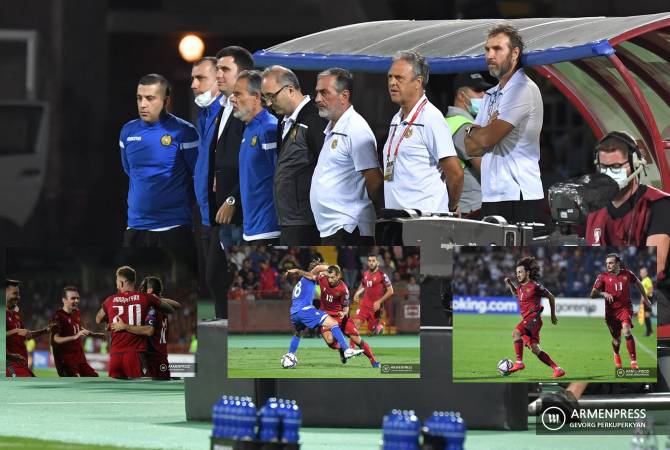 In the qualifying round of the World Cup, the Armenian national team held three consecutive matches, three completely different games, which had a different look, mood and quality. Before the match against North Macedonia in the 4th round, the Armenian team had a 100% result, celebrating 3 victories in three matches and leading the tournament table with 9 points. This fact became a subject of great discussions in the Armenian press, as well as was covered by the German media. Germany, which is among the top 10 teams in the world, was only the second in the tournament table.

In the game against North Macedonia, Joaquín Caparrós’ team played more in the midfield, and there was an impression that a draw was acceptable for the Armenian team, which would bring the points of the Armenian team to 10. The statistics showed that the Macedonians had more control of the ball, were more accurate with the ball and more effective. Anyway, the game ended in a draw, 0-0.

In the match against Germany, the Armenian team was "crushed" during the first half, as it was already losing 0: 4 before the break, and let in two more goals in the second half. The score of 0: 6 spoke about the level of the game and the teams. German goalkeeper Manuel Neuer added fuel to the fire and announced after the game that teams like Armenia, Macedonia and Iceland cannot play in the World Cup.

This part of the round ended with a game against Liechtenstein, the statistics of which gave an absolute advantage to the Armenian team, but the players of the Liechtenstein team were happy with the final result.

Unlike the first three games of the qualifying round, in the next three games there was no discipline in the actions of the Armenian team, there style of the play that could be clearly noted at the beginning, was missing. At the end of these three games, especially after the game against Liechtenstein, the head coach of the Armenian national team Joaquín Caparrós stressed that "football is like this, sometimes unfair."

After three matches, there was a great deal of discussion among professionals and football fans that the team is not so successful when the long-time captain, Roma midfielder Henrikh Mkhitaryan, joins the team. Football fans said that only taking into account the facts, the team had won the previous games in which Mkhitaryan did not participate, and gained just two points in the games with his participation. Some expressed the opinion that Mkhitaryan's participation somehow has an impact on other players.

However, Mkhitaryan was and remains the leader of the Armenian national team, who holds the title of the best striker of all time, and is able to act and organize the game in the positions instructed by the coach. Mkhitaryan is one of the best midfielders in Europe, but football is a group game of 11. Messi is one of the best in human history, but Argentina has not yet become a world champion with his participation.

The Armenian team had losses in the first of the three matches. The main team leaders were absent, which definitely played a role in the match against North Macedonia. The German team, of course, had a special approach to the match against Armenia, as the Armenian team was the leader of the tournament table, besides Germany had a new head coach, who in turn needed to prove his superior level. We should not forget that years ago Germany did not spare the multiple world champion Brazil, now it should not spare Armenia, which casts a shadow over its reputation. But the fact that the result of the match against Liechtenstein can be considered unacceptable should be raised. Those 3 points are necessary like air and water in tournaments like this.

If we got 9 points in the first three games of the qualifying round, we got only 2 points in the next three games. We scored one goal in three games, and that from 11-meter kick.  The Armenian team has the problem of using the opportunities. The footballer who will finalize the attacks is not yet seen, which brings to similar results. If at the beginning of the World Cup Armenia was not a serious problem for the rivals, now we can say there is serious approach towards the matches against our team.

The most important thing, the mentality, in the Armenian team has changed. The mentality changer is the Spanish specialist, head coach of the team Joaquín Caparrós. Irrespective of if we will be able to overcome the qualifying round and what will happen in the future games, the Armenian football needs Joaquín Caparrós. The fruits of his work will be seen after long time, when today’s generation of the U19 team of Armenia will come to replace them, since they have seen how the Armenia national team celebrates victories. We have passed half the way, and now no efforts should be spared to record success in the upcoming 4 matches.