Heads of Armenian, Austrian parliaments discuss in detail the steps to be taken for the immediate release of POWs | ARMENPRESS Armenian News Agency

Heads of Armenian, Austrian parliaments discuss in detail the steps to be taken for the immediate release of POWs 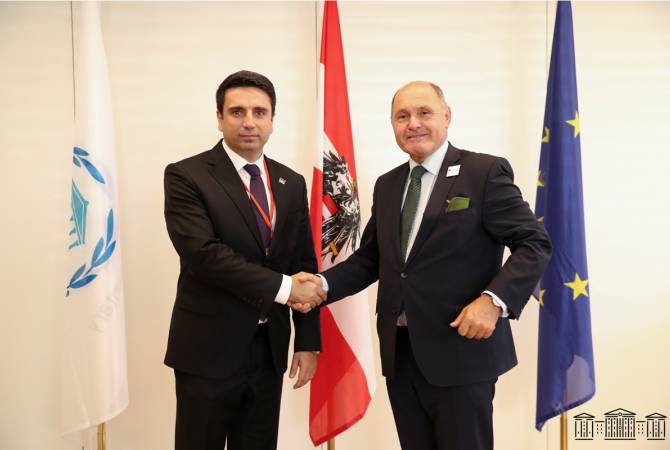 
YEREVAN, SEPTEMBER 9, ARMENPRESS. The working visit of the delegation led by the Speaker of the National Assembly of Armenia Alen Simonyan to Vienna continues. Within the framework of the visit Alen Simonyan met with the President of the Austrian National Council Wolfgang Sobotka. The parties discussed in detail the steps to be taken for the immediate release of prisoners of war held by Azerbaijan.

As ARMENPRESS was informed from the press service of the National Assembly, Alen Simonyan highlighted Wolfgang Sobotka's contribution to the deepening and development of the inter-parliamentary and interstate relations between the two countries. According to the head of the parliament, Armenia considers it necessary to take steps to intensify inter-parliamentary cooperation and contacts.

The sides referred to Armenia-EU visa liberalization negotiations. The head of the Armenian parliament stated that today Armenia advocates the agenda of establishing long-term and lasting peace in the region. In its foreign policy, Armenia is guided by the principle of conciliation of interests, which allows Armenia to pursue a balanced and flexible foreign policy.

Wolfgang Sobotka praised the democratic achievements of the Republic of Armenia, a vividly proof of which is the recent early parliamentary elections. It was noted that Armenia welcomes Austria's efforts to strengthen peace and stability in the region, to create an atmosphere of mutual trust, to promote regional cooperation, as well as to resolve the Artsakh conflict within the framework of the OSCE Minsk Group Co-Chairs.

Wolfgang Sobotka expressed confidence that the Nagorno-Karabakh conflict should be resolved in the format of the OSCE Minsk Group Co-Chairs. The parties discussed in detail the steps to be taken for the immediate release of prisoners of war held by Azerbaijan. Alen Simonyan thanked the Austrian parliamentarians for the discussions and statements condemning the aggression during the war unleashed by Azerbaijan against Artsakh in the fall of 2020.