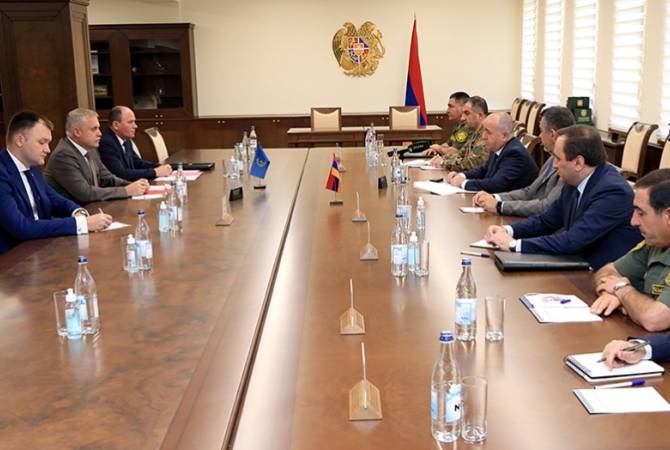 
YEREVAN, AUGUST 9, ARMENPRESS. Defense Minister of Armenia Arshak Karapetyan received on August 9 Secretary-General of the CSTO Stanislav Zas, who is in Armenia on a working visit.

As ARMENPRESS was informed from the press service of the MOD Armenia, greeting the guest, the Defense Minister said, ‘’We were looking forward to your visit still in May. That was a quite tense period for Armenia, but unfortunately, your visit did not take place. Today we have a stable tense situation on our borders. In May, the Azerbaijani armed forces invaded the Armenian territory in two directions. It’s extremely concerning for us. We are  an advocate of peace. We in no case want escalation of situation on our borders. At the same time, we are not ready to be in peace with acts that can lead to violation of the state border of Armenia. We will resolutely defend our territories. We, of course, seek to resolve this issue peacefully, demonstrating our peacefulness. At the same time, our patience is not inexhaustible; in the absence of a peaceful resolution of the situation on our borders, we reserve the right to resolve the issue by force’’.

Armenian Defense Minister Arshak Karapetyan expressed regret for that the CSTO decision making and crisis response mechanisms are not in line with the developments of the operative situation.

The Armenian Defense Minister also informed the CSTO Secretary -General about the conceptual visions of Armenia’s chairmanship over the CSTO, stressing that raising the effectiveness of the organization will be among the priorities of the Armenian side.

The CSTO Secretary General informed the Armenian Minister of Defense that the joint sittings of the CSTO Committee of Foreign Affairs, Defense Ministers and the Secretaries of the Security Council are scheduled for September 15 in Dushanbe, and the CSTO Security Council will be convened on September 16, during which the CSTO chairmanship will be handed to the Republic of Armenia.