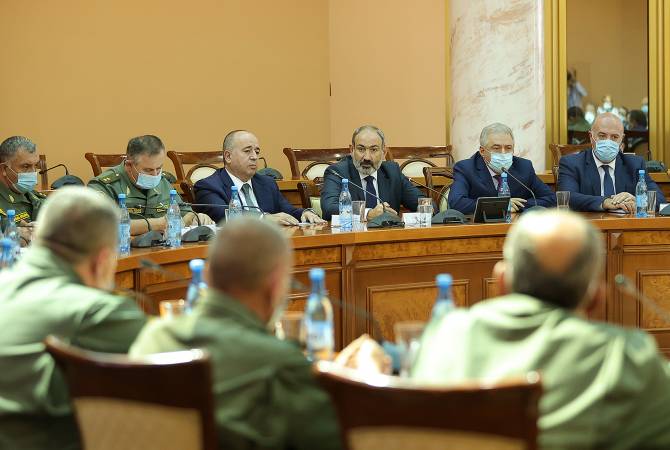 As ARMENPRESS was informed from the Office of the Prime Minster, Nikol Pashinyan thanked former Minister Vagharshak Harutyunyan for his work and congratulated Arshak Karapetyan on his appointment as Minister.

The Prime Minister noted that like Vagharshak Harutyunyan, Arshak Karapetyan assumes the responsibilities of a minister in a very difficult situation. ''I am speaking about the regional situation, which, unfortunately, we cannot assess as stable'', Pashinyan said.

Referring to the criticism of why the Armed Forces of Armenia do not take measures to solve the situation over the infiltration of Azerbaijani units into the sovereign territory of Armenia, Nikol Pashinyan said, ''From the very beginning our position was the following – as long as there is the opportunity to solve the situation through diplomatic, political methods, we will pursue that path. And as long as we see that opportunity, we must push the processes to that direction''.

Speaking about unblocking of regional infrastructures, Nikol Pashinyan noted that it's on the agenda of the Armenian Government, but Azerbaijan is trying to add elements which are inadmissible for Armenia, ‘'I mean, particularly, the talks about a corridor'', he said, emphasizing that there has never been any written or oral agreement over a corridor through the territory of Armenia.

PM Pashinyan also emphasized that speedy implementation of reforms in the Armed Forces is of key importance and wished the newly appointed Minister success in that mission.