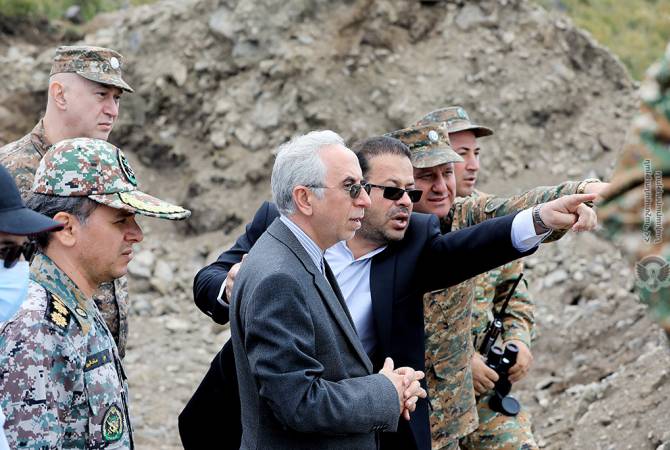 
YEREVAN, AUGUST 3, ARMENPRESS. Ambassador of Iran to Armenia Abbas Badakhshan Zohouri together with Iranian embassy's military attaché Colonel Bahman Sadeghin visited Gegharkunik Province of Armenia, accompanied by the representatives of the Defense Ministry of Armenia, ARMENPRESS was informed from the press service of the MoD Armenia.

Commander of Corps, Major-General Arayik Harutyunyan presented to the Ambassador the situation on the border, after which a visit to the border section at Verin Shorzha section was organized.

Expressing concern over the continuous border disputes between Armenia and Azerbaijan, the Iranian Ambassador emphasized the necessity of restraint from both sides and peaceful solution of disputes between the two countries. He offered condolences to the families of the servicemen killed during the recent-days clashes. Stressing the importance of respecting the international recognized borders, Ambassador Zohouri noted that ensuring lasting peace in the South Caucasus stems from the interests of the peoples of the region and expressed the readiness of Iran to assist in the establishment of lasting peace.