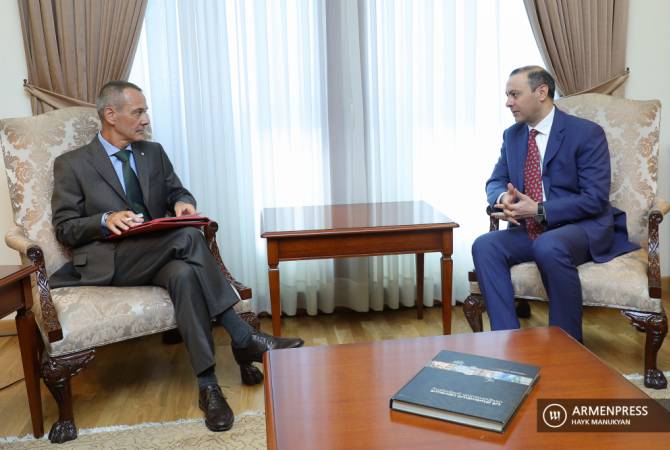 During the meeting Armen Grigoryan highlighted the necessity of the immediate repatriation of Armenian prisoners of war and civilian captives illegally held in Azerbaijan and considered impermissible their prosecution by Azerbaijan with sham criminal cases.

The acting FM stated that according to the third Geneva Convention, they have a status of a prisoner of war, therefore they must be under the protection of the international humanitarian law. He added that this policy of Azerbaijan contradicts point 8th of the 2020 November 9 trilateral statement, according to which the exchange of POWs, hostages and other persons held must have taken place.

It was stated that Azerbaijan denies the fact that many POWs are under its control, which has been proved by numerous sources, and refuses to provide information about them, as well as hides their detention places. Such behavior gives serious grounds for suspicion of heavy crimes committed by Azerbaijan against the captives, as well as their enforced disappearances.

Touching upon the issue of providing humanitarian aid to the affected population, the acting FM highlighted the necessity of expanding the presence of international humanitarian organizations in Artsakh.

Grigoryan drew the attention of his guest on the current humanitarian situation caused by the Azerbaijani offensive operations against the sovereign territory of Armenia, expressing concerns that the continuous presence of Azerbaijani armed forces in the Armenian territory disrupts the normal life of bordering residents and leads to violations of their rights.

In his turn the ICRC Delegation head informed about the actions taken by their Organization aimed at ensuring communication between the captives and their families, as well as introduced the ICRC ongoing actions in the border regions.