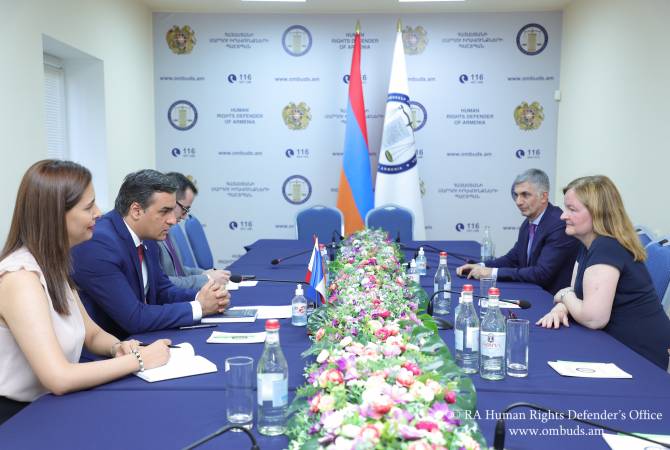 
YEREVAN, JULY 21, ARMENPRESS. Human Rights Defender of Armenia Arman Tatoyan received Member of European Parliament representing France Nathalie Loiseau, who is also the Chairwoman of the Security and Defense Subcommittee of the EP Committee on Foreign Affairs and head of the Delegation of “La République en Marche” party in the European Parliament, the Armenian Ombudsman’s Office told Armenpress.

Ombudsman Tatoyan presented the facts of violations of rights of Armenia’s border residents by the Azerbaijani armed forces. In particular, he presented proofs that there shouldn’t be Azerbaijani servicemen, flags and banners near the villages of Armenia’s Syunik and Gegharkunik provinces, and on the roads between the communities of Syunik.

He said the Azerbaijani servicemen regularly obstruct the harvest of the border residents, steal their animals and threaten the locals.

Tatoyan noted that such criminal acts of the Azerbaijani servicemen are directed at depriving Armenia’s civilian population of the right to life, property and other vital rights.

He also touched upon the urgency of the return of Armenian captives from Azerbaijan, stating that presenting them as “terrorists” or “saboteurs” is grossly violating the international demands. Tatoyan said all servicemen and civilians of the Armenian side held in Azerbaijan have a status of captive, they must be immediately released and returned to homeland without any precondition. The Azerbaijani authorities artificially delay and politicize the process, by grossly violating the rights of the captives and their families, causing sufferings to them and tension among the public.

Arman Tatoyan has also presented the war crimes committed by the Azerbaijani forces during the recent war in Artsakh.

At the end of the meeting the sides agreed to cooperate in the field of human rights.