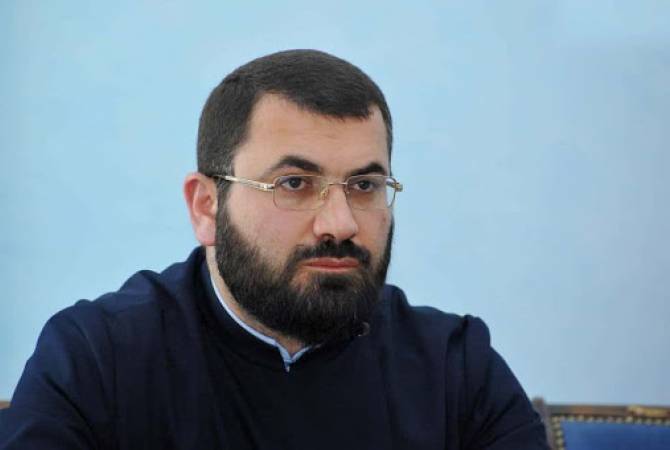 
YEREVAN, JULY 13, ARMENPRESS. Fr. Archimandrite Shahe Ananyan, Director of the Inter-Church relations Department of the Mother See of Holy Etchmiadzin commented on the false announcements made by the Grand Mufti of Azerbaijan, Chairman of the Caucasus Muslims` Board Allahshukur Pashazadeh in an interview with ARMENPRESS, as well as spoke about the possible meeting between the Catholicos of All Armenians, the Chairman of the Caucasus Muslims` Board and the Patriarch of All Russia.

- How would you comment on the statements of Allahshukur Pashazadeh, the chairman of the Caucasus Muslims` Board, made in Shushi about St. Ghazanchetsots Church, that it's allegedly of non-Armenian origin?

- We learnt from the media about the regular false announcements made by Chairman of the Caucasus Muslims` Board Allahshukur Pashazadeh in front of different religious denominations of Azerbaijan… What can we say? It is a style typical of Pashazadeh, to interpret facts according to their own interests and perceptions. Avoiding thinking about the occupation of the most part of Artsakh, leaving thousands of families without shelters, desecration and destructions of religious-cultural values of the Artsakh Diocese, Pashazadeh again referred to the so-called Aghvan-Udi church (Caucasian Albania-edited) and its false religious-cultural agenda.

- It’s known that there is an official format of meetings between the Catholicos of All Armenians, the Chairman of the Caucasus Muslims` Board and the Patriarch of All Russia, in the sidelines of which a declaration has been signed on the peaceful settlement of Nagorno Karabakh conflict. Does that format still exist and is that possible that new meetings and discussions are held in that format?

- There is an official format of trilateral meetings between the Catholicos of All Armenians, the Chairman of the Caucasus Muslims` Board and the Patriarch of All Russia, where the religious leaders have discussed the opportunities of finding ways for a peaceful settlement of the Artsakh conflict, and naturally, many other issues related with it. Still during the military operations the Catholicos of All Armenians had sent a letter to Patriarch Kirill, expressing readiness to meet with the leader of the Caucasus Muslims in a trilateral format aimed at fostering the restoration of the ceasefire and regional peace.

After the 44-day war the Catholicos of All Armenians sent an official letter to Patriarch Kirill, so as he could leave for Baku under Patriarch Kirill’s mediation to meet with Azerbaijani president Ilham Aliyev and Pashazadeh for discussing the issues of returning the Armenian POWs and the preservation of our religious-cultural heritage in the territories that have passed under the Azerbaijani control.

As refers to the announcement of Allahshukur Pashazadeh about his willingness to meet under the UN auscpices, that's a result of misunderstanding. The Catholicos of All Armenians answered to the proposal of the UN representative in the USA about meeting with the Azerbaijani Sheikh (Pashazadeh) that Patriarch Kirill has already agreed to hold such a meeting in Moscow.