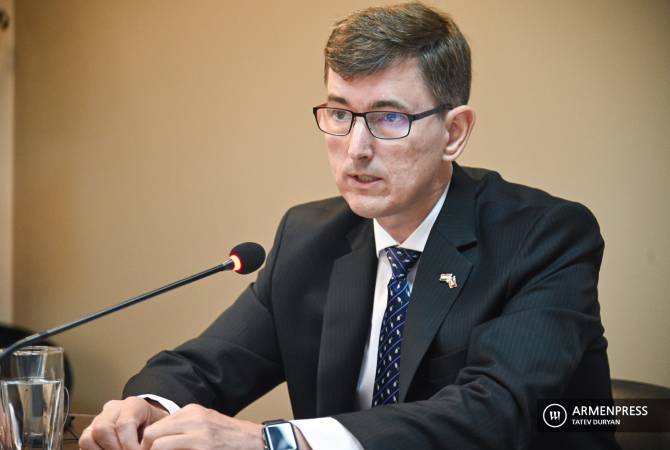 
YEREVAN, JULY 7, ARMENPRESS. The Netherlands is interested in intensifying the cooperation with Armenia in several directions, Dutch Ambassador to Armenia Nico Schermers said during a press conference today, stating that they are trying to work with their own programs, targeting different fields such as democracy, rule of law, agriculture, IT, etc.

“Several programs with numerous NGOs, different representatives of civil society are being discussed. We are trying to understand what we can do to help Armenia further improve the operation of democratic structures. We also work on the protection of human rights”, the foreign diplomat said.

According to him, interest by the Netherlands on investing in Armenia is increasing. Focus is paid on agriculture development. The Ambassador noted that the Netherlands is the 2nd in the world with export volumes of agricultural goods.

“Armenia also has a great potential for agriculture. Armenia is a member of the Eurasian Economic Union, and thanks to this there is a big interest among the investors of other countries. The European countries look for transparency, clarity and safety. If all these factors are ensured, investments will increase”, the Ambassador stated.

He said Armenia is an interesting partner also in IT direction. The Ambassador shared his impressions from the visit to the TUMO Center for Creative Technologies, adding that he is amazed by the Center’s activity and development programs.

Nico Schermers stated that they will try to develop and promote the cooperation between the Armenian and Dutch IT companies, keeping in focus also the tourism sector.

As for the possible investments, the Ambassador said he cannot provide information about concrete programs at the moment, but stated that he is regularly surprised by everyday developments on this direction. There are Dutch companies which are interested in operating in Armenia.

Nico Schermers reminded that the Armenia-EU Comprehensive and Enhanced Partnership Agreement (CEPA) has entered into force from March 1, 2021, and before its entry into force preliminary works in several directions have already been done. He says the agreement sums up Armenia’s relations with Europe. It contains many provisions on political, scientific, cultural and other partnership.