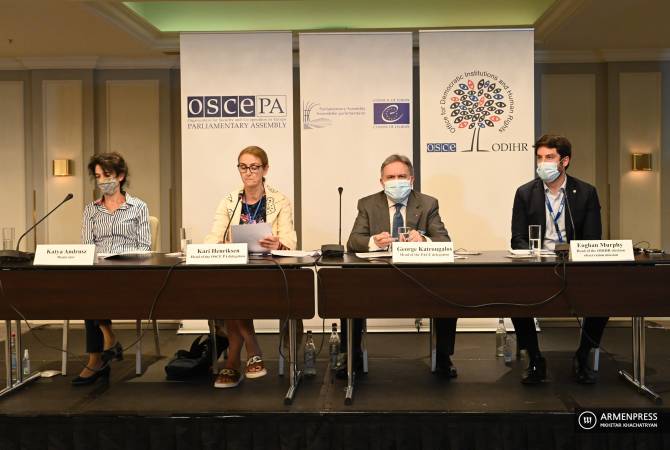 
YEREVAN, JUNE 21, ARMENPRESS. According to an international observer mission, the snap parliamentary elections in Armenia were competitive and generally well-managed within a short timeframe, the representatives of OSCE ODIHR, OSCE Parliamentary Assembly and PACE joint observer mission said at a press conference today in Yerevan.

“Our general conclusion is that the parliamentary elections of June 20th were competitive and generally well-managed within a short timeframe”, head of the OSCE Parliamentary Assembly’s delegation Kari Henriksen said.

However, the observers said that the elections were characterized by intense polarization and marred by increasingly inflammatory rhetoric among key contestants. “The legal framework is generally comprehensive, but the fact that amendments were adopted so close to the elections caused some legal uncertainty. The election administration conducted its work in a transparent, collegial and professional manner and enjoyed electoral stakeholders’ confidence”, the delegation head said, adding: “The overwhelming majority of our mission, overall, assesses positively the election day, including the vote count”.

He said generally, women were sidelined throughout the campaign. “It’s important that women are not only equally represented, but have an opportunity to engage actively in public and political life”, he noted.

According to the international observer mission, national security issues dominated the political discourse, overshadowing debate on other policy issues, and harsh rhetoric exacerbated an already polarized political environment. Election day was generally peaceful. IEOM observers assessed the opening and voting processes positively in the overwhelming majority of polling stations observed. However, IEOM observers reported that the majority of polling stations were not accessible for persons with physical disabilities.

“The vote count was assessed positively in most polling stations where it was observed and was characterized by a high level of transparency”, head of the PACE delegation George Katrougalos said, expressing hope that the results will be accepted by all political forces participating in the elections.

“Voters were provided with a broad range of options, and fundamental rights and freedoms were generally respected, with contestants being able to campaign freely”, OSCE ODIHR mission head Eoghan Murphy stated.