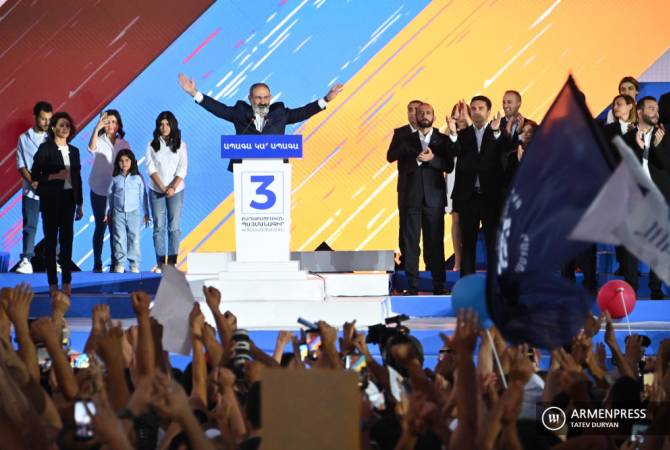 The Republic party has firstly expressed his deepest gratitude to all those who trusted them and voted in their favor.

“We appreciate your trust and feel obliged before you. The Republic party congratulates the winning team, wishing success in these decisive and difficulties times for Armenia. We wish that all forces elected to the parliament work for the benefit of our country and statehood and respect the desire of their voters. We do not put a difference between the citizens of our country. The Republic party promises its voters that it will continue spreading its approaches with the same energy, trying to balance Armenia’s foreign policy, proposing solutions to economic boost and new investment programs. We wish peace and welfare to our people and a productive work to the Parliament of 8th convocation”, the party’s Board said in a statement.

Arman Babajanyan from the Shirinyan-Babajanyan Alliance of Democrats said on social media that a democratic election was held in Armenia which ensured the freedom of voting. “Therefore any attempt to revise the result in post-election developments will be an encroachment against Armenia’s stability, public solidarity, in other words, it will be an internal attack against Armenia”, he said, congratulating the Civil Contract party.

President of the Fair Armenia party Norayr Norikyan stated that everyone must take into account the new situation formed in the political field.

“The outcome is a key message for me personally, to understand the essence of human relationships during the political activity, and the essence of “rules of the game” in the political field. The Fair Armenia party has been formed just 4 months ago, and the 4000 votes received come to show that we still have a lot to do to acquire the trust of our people and have a serious impact in the political field. I personally expresse my gratitude to all our citizens who have voted in favor of our party”, he said.