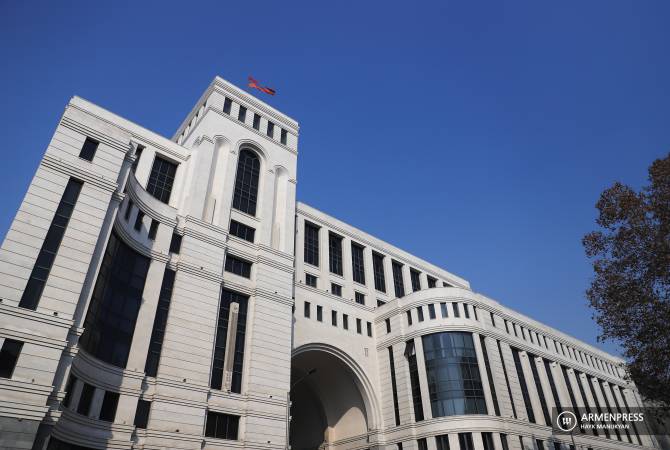 
YEREVAN, JUNE 20, ARMENPRESS. The World Refugee Day is marked with new challenges for Armenia and the Armenian people. The war unleashed by Azerbaijan against Artsakh in September 2020 led to massive forced displacements, Armenia’s Foreign Ministry said in a statement on the World Refugee Day.

This year, the World Refugee Day is marked with new challenges for Armenia and the Armenian people.

The war unleashed by Azerbaijan against Artsakh in September 2020 led to massive forced displacements.

About 90,000 people were displaced from their homes and fled to Armenia, 88% of whom were women and children. These people had to leave their homes and property acquired through generations to escape mass atrocities.

Significant part of the displaced people, particularly from Shushi and the Hadrut region, today are unable to return to their homes as those territories are now under the Azerbaijani control.

Many of those people are displaced twice: they were forcibly displaced in the 1990s from the settlements that had fallen under the control of the Azerbaijani forces in the result of the aggression against the people of Artsakh and were subjected to ethnic cleansing. Particularly, it implies to the Armenians displaced from the settlements in the northern part of Shahumyan and Martakert regions, most of whom later settled in the territories under the control of the Republic of Artsakh.

During the recent aggression unleashed by Azerbaijan against Artsakh in September-November 2020, these people became refugees twice, while still facing the consequences of the humanitarian crisis.

The provision 7 of the trilateral statement of November 9, 2020, which states: “internally displaced persons and refugees shall return to Nagorno-Karabakh and adjacent areas under the control of the Office of the UN High Commissioner for Refugees” is not being implemented. The rights of the Armenians of Artsakh have not yet been restored, among which first of all are the insurance of their safe return to the places of their residence and the creation of appropriate conditions, including through the de-occupation of the territories of the Republic of Artsakh currently under the Azerbaijani control.

Armenia has repeatedly called the attention of the international community to the vulnerability of the population living in the conflict areas, urging them to ensure their protection on the basis of international law, first and foremost the principle of universal human rights.

The manipulation of refugee issues, the shameful practice of turning them into an instrument of political pressure, must be condemned.

The implementation of humanitarian projects, the provision of urgent humanitarian assistance to the population in crisis situations must be carried out regardless of any circumstances, including the status of the territory”.