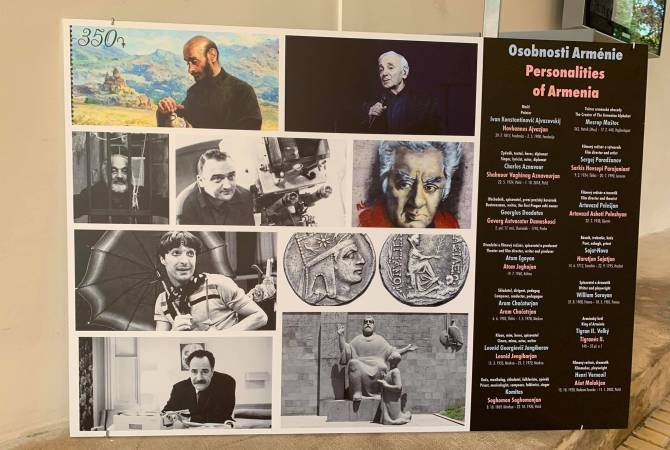 
YEREVAN, JUNE 18, ARMENPRESS. The Armenian historical-cultural heritage will be presented in various cities of the Czech Republic, the Armenian Embassy in Prague reported.

The project is implemented within an expanded format of the traditional Days of Slavic Culture Festival, which has evolved to presenting 3-4 countries annually.

The Armenian part of the festival is implemented under the auspices of the Embassy of Armenia to the Czech Republic. It consists of a traveling exhibition, that presents the Armenian historical-cultural heritage items inscribed on the UNESCO World Heritage List, the Representative List of the Intangible Cultural Heritage of Humanity and on the tentative lists, as well as prominent Armenian personalities, among which are those who have a demonstrated connection to the Czech Republic and the Czech people.

The main exhibition is complemented by another exhibition of photographs entitled “Armenia-the Land of Mountains, Churches and Wine” by a former Chairperson of the Czech Republic-Armenia Parliamentary Friendship Group Robin Böhnisch. On various occasions, the exhibitions are accompanied by the performances of the Armenian dance ensemble “Kilikia” and singer Karin Sarkisjan, as well as gastronomical and other events organized by the local Armenian communities.

The Armenian program kicked off in Brno on May 5 also under the auspices of the Governor of South Moravia, where the exhibitions were displayed in the Regional Administration building and various other places in Brno until June 11, 2021. Within his working visit to the South Moravian Region, on June 11 Ambassador Ashot Hovakimian attended the closing ceremony of the exhibition by the Governor of the region Jan Grolich and Deputy Governor Lukáš Dubec. In the evening, Ambassador Ashot Hovakimian and Deputy Governor Lukáš Dubec jointly attended the Armenian evening in Villa Löw-Beer, where the last display of the exhibitions took place, accompanied by the performances of the Armenian ensemble “Kilikia”, the Armenian singer Karin Sarkisjan and the local “Slovácky” ensemble, followed by a degustation of Armenian specialties and wines.

On June 12, Ambassador Ashot Hovakimian visited Uherský Brod, where the official launching of the Armenian program took place in the form of a day of Armenian culture, held also under the auspices and presence of the Governor of the Zlin region Radim Holiš and the Mayor of Uherský Brod Ferdinand Kubáník.The celebration commenced with the performances of the “Kilikia” ensemble and singer Karin Sarkisjan within the White Carpathian Festival 2021, which were followed by the opening of the exhibitions in the local House of Culture.

The Ambassador’s visit was concluded by a visit to the Museum of Jan Amos Comenius (Komenský), the great Moravian philosopher, pedagogue and theologian.

For more information about the project visit: https://www.cultural-heritage.cz/armenie/