You may be disappointed with us, but you cannot endanger freedom and democracy – Ararat Mirzoyan | ARMENPRESS Armenian News Agency

You may be disappointed with us, but you cannot endanger freedom and democracy – Ararat Mirzoyan 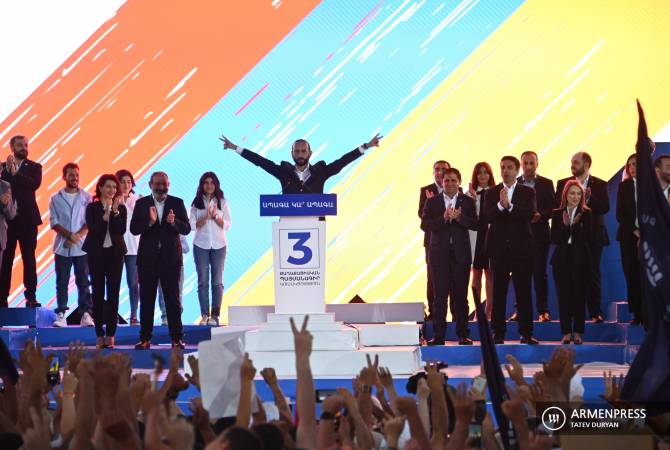 
YEREVAN, JUNE 17, ARMENPRESS. President of the National Assembly of Armenia, member of ‘’Civil Contract’’ Party Ararat Mirzoyan thinks that Armenia has two paths, assessing the upcoming early parliamentary elections decisive for the choice between the two paths, ARMENPRESS reports Mirzoyan said in the concluding pre-election rally of the ‘’Civil Contract’’ Party at the Republican Square.

Mirzoyan first presented what they have done during the last 3 years, reminding that during the 1st year they had no parliamentary majority, therefore, had no tools for necessary reforms, as well as reminded about the coronavirus pandemic and the war.

Speaking about the reforms, Mirzoyan noted that adoption of the new Electoral Code and amendment of the Law on Parties. Mirzoyan acknowledged that, unfortunately, reforms in the judicial sphere have not been completed.