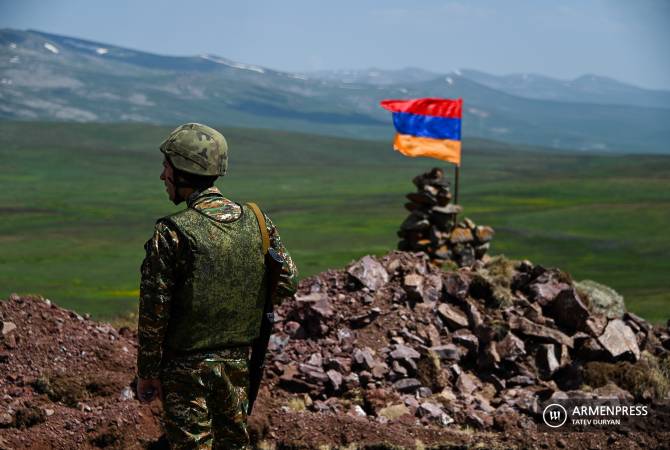 On June 16, a group of Armenian reporters, accompanied by the representatives of the General Staff, visited the new military positions located in the direction of Jermuk to get acquainted with the border situation and ongoing works. The representatives of the armed forces told reporters that the Armenian servicemen fully control the situation and are ready to fulfill their duties at any moment.

“After the November 9 statement, we, the servicemen, have fulfilled all our tasks. In the period of November 17-29 the regiment built a new defense post where we are currently deployed in. The post ensures the defense of the state border, and currently large scale of works on engineering equipment of the post, construction of roads are underway”, Commander of N military unit Colonel Gegham Martirosyan said adding that it’s just a month the weather allows to carry out these works in the military positions. But not only the weather, the location of the site also complicate this process, he said.

The situation in that part of the Armenian state border was calm. The servicemen said no aggressive actions or incidents by the adversary are taking place.

The Azerbaijani posts are at different distance from different positions, in some areas they are 1000-1500 meters away, and in others – 100-150 meters.

The commander said the Azerbaijani side hasn’t advanced to the territory where the reporters visited, but stated that there has been some violation of the border in a separate section of the overall unit. It took place during the incidents of May 12 when the Azerbaijani armed forces carried out a military aggression against Armenia, infiltrating into several sections of Armenia’s border. However, the commander noted that overall the situation in this border area is calm.

“There is no tension, there is no provocative action by the adversary at this moment”, Colonel Martirosyan said, stating that the border units of the Armenian Army, including the position-holders of this particular post, are always ready to fulfill their combat duties at any moment and resist any provocation and encroachments of the Azerbaijani side.