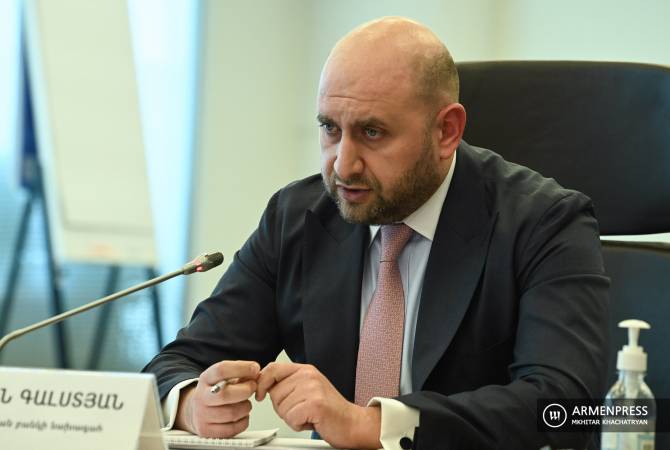 
YEREVAN, JUNE 15, ARMENPRESS. Armenia’s Central Bank is expecting significant inflationary influence on the economy from the external sector and the domestic economy, but it forecasts that the 12-month inflation will be maintained at a high level in the short-run, and then will gradually decrease and will stabilize around the targeted 4%, CBA President Martin Galstyan said at a press conference, reminding that today the Board decided to raise the refinancing rate by 0.5%, setting it at 6.5%.

“0.4% deflation was recorded in May 2021 compared to the 0.1% deflation of the same month of the previous year. In this case the 12-month inflation has declined and comprised 5.9%. The 12-month normal inflation continued accelerating, comprising 7.4% as of late May”, he said.

Mr. Galstyan noted that in the second quarter of 2021, conditioned by the positive effects of the use of vaccinations against COVID-19 and the fulfillment of promoting policies, Armenia’s main partner countries are recording higher recovery rates in economic activity and gross demand than predicted.

He stated that the ongoing developments outline faster recovery rates for Armenia’s economic growth than expected, which is mainly conditioned by the positive developments in industry and services field. The gross demand is also recovering at higher rates than projected, which is mostly contributed by the quick growth in global demand, the increase in monetary transfers from abroad and the high growth rate of private consumption, meanwhile the private investment activeness remains weak.

“At the same time, the Board considers the necessity of possible toughening of monetary-credit terms in the future. In such situation it is expected that the 12-month inflation will be maintained at a high level in the short run, but will gradually decrease and will stabilize around the targeted 4% in the predicted horizon”, he said.