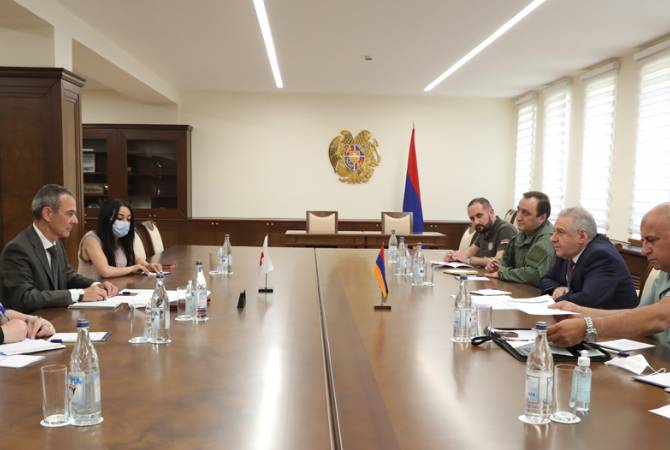 
YEREVAN, JUNE 11, ARMENPRESS. Defense Minister of Armenia Vagharshak Harutyunyan received on June 11 the delegation led by head of the Delegation of the International Committee of the Red Cross (ICRC) in Armenia Thierry Ribo.

As ARMENPRESS was informed from the press service of the Defense Ministry of Armenia, during the meeting the sides referred to the issues aimed at clarifying the fates of missing in action and hostages resulted by the Turkish-Azerbaijani aggression against Artsakh in September, 2020.

Vagharshak Harutyunyan expressed concerns over the fact that the Azerbaijani side up till now conceals the real number of POWs and civilian hostages and attempts to make this exclusively humanitarian issue a subject for political speculations. It was mentioned that this behavior is a gross violation of now only international laws, but also the trilateral declaration signed between the leaders of Armenia, Russia and Azerbaijan on November 9, 2020.

Vagharshak Harutyunyan thanked the head of the ICRC Armenia delegation for its efforts aimed at the protection of the rights of the Armenian citizens kept in Azerbaijan.

Thierry Ribo assured that the ICRC delegation carries out all necessary steps for acquiring information about the fates of the missing in action, as well as the POWs and civilian hostages.