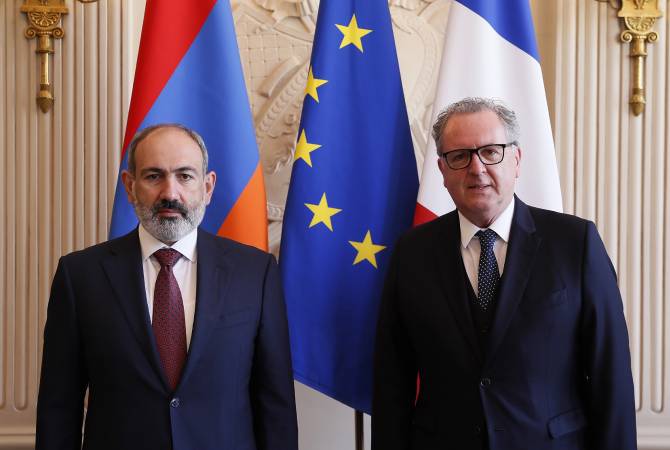 The French National Assembly Speaker welcomed Pashinyan’s visit to Paris and congratulated the latter on the birthday, wishing success in his future activities. “Mr. Prime Minister, Armenia is a friendly state for France, and we highly value the continuous development and expansion of the bilateral relations. In the past difficult period for Armenia we have been in constant touch with the Armenian partners, our lawmakers have stood by Armenia. We will also contribute with our actions to the overcoming of the challenges facing the Armenian people”, Richard Ferrand said.

In his turn Nikol Pashinyan thanked for the warm welcome and stated that Armenia has felt the support of friendly France, including the members of the Senate and the National Assembly at all difficult times. “The talk is not about the politicians only. Just a month ago a survey has been conducted in Armenia, and asked “which country do you consider as Armenia’s friend”, most of the respondents mentioned France. Of course, we are interested that France has bigger presence in Armenia”, Pashinyan said, highlighting the expansion of the presence of French businesses, investors in Armenia.

Pashinyan also touched upon the situation in Armenia after the recent Artsakh war and noted that the main issue is the security situation around the country. He also presented the circumstances of the ongoing incidents on the Armenian-Azerbaijani border and in this case as well highlighted France’s friendly stance. “France has expressed a clear, definite and non-misleading position”, Pashinyan said, stating that Armenia is trying to solve the border situation through diplomatic means in cooperation with the international partners.

As for the settlement of the Nagorno Karabakh conflict, Nikol Pashinyan attached importance to the active role of the OSCE Minsk Group Co-Chairmanship in that process. He also highlighted the importance of the resolutions adopted by the French Senate on the necessity of the independence of Nagorno Karabakh, as well as ensuring the return of Armenian prisoners of war from Azerbaijan.

Richard Ferrand stated that they closely follow the ongoing developments in the South Caucasus. “France stands by Armenia, please convey our message to the Armenian people. We will do everything so that stability and welfare are established in Armenia. You have always relied on us and can rely on us also now and in the future as well”, he said.

The French side has once again emphasized the protection of Armenia’s territorial integrity, ensuring the quick return of Armenian POWs from the Azerbaijani captivity, the importance of preserving the Armenian cultural heritage in Nagorno Karabakh and the engagement of UNESCO to this process. “We hope Armenia will restore its unity after the upcoming elections and move towards the future”, the National Assembly Speaker said.

At the same time, it was reported that a new resolution is being prepared in the French National Assembly relating to the return of the Armenian POWs, as well as the France-Armenia parliamentary friendship group is expected to visit Armenia.