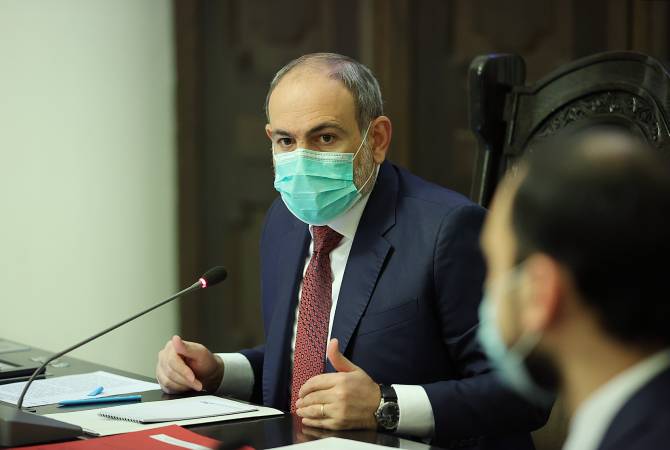 
YEREVAN, MAY 13, ARMENPRESS. During the Cabinet meeting, Caretaker Prime Minister Nikol Pashinyan addressed the situation at the Lake Sev in Syunik Province.

“Yesterday morning the Azerbaijani armed forces carried out a provocative operation and crossed the Armenian state border in the Lake Sev section. So far there is basically no significant change in the situation, and the situation continues to be the same. This means that there are Azerbaijani soldiers near the Lake Sev and there is also a large presence of our troops there. But the situation has not reached a military escalation, meaning there is no exchange of gunfire or clashes. Work is being carried out since yesterday to withdraw the Azerbaijani soldiers from that area,” Pashinyan said.

Pashinyan said the action was a planned provocation by Azerbaijan, because the Azeri soldiers carry explicitly fake maps by which they are trying to claim that they are within Azeri border limits. “It is obvious that the maps are faked, and this is seen by comparison of maps that were officially confirmed back in Soviet times. Certainly a highly important question is as to how was it possible for Azerbaijani soldiers to cross and pass our neutral zones and reach the Lake Sev. This is a separate issue which will definitely be considered.

There’s been much talk since yesterday saying the Defense Ministry and the National Security Service were denying the information but in the end it was confirmed. I’d like to draw everyone’s attention on the fact that the Defense Ministry and National Security Service were denying the disinformation on combat and casualties. And before a complete assessment was issued around the situation an assessment was made and the complete information was provided.

We must treat this situation very seriously because basically we are dealing with a crisis which may have several scenarios of further development. Our objective is for the sovereign territory of Armenia to be and remain inviolable. The Azerbaijani armed forces must pull back to their initial positions, meaning to the positions from where they started this advance, that is the positions where they were located as of May 10,” Pashinyan said.

He said work is currently being done at the area.

A Security Council meeting will be held after the Cabinet meeting to discuss the situation further.

“I’d like to once again say for the record that to say the least we have a situation which should be treated very seriously, we must act thoroughly, decisively, principled and the state bodies must combine their actions and ensure high level of partnership for the resolution of the situation. Of course, we all want them to leave to where they came from, and we must solve this issue,” Pashinyan said.