Nagorno Karabakh conflict is far from being resolved, reiterates Yerevan 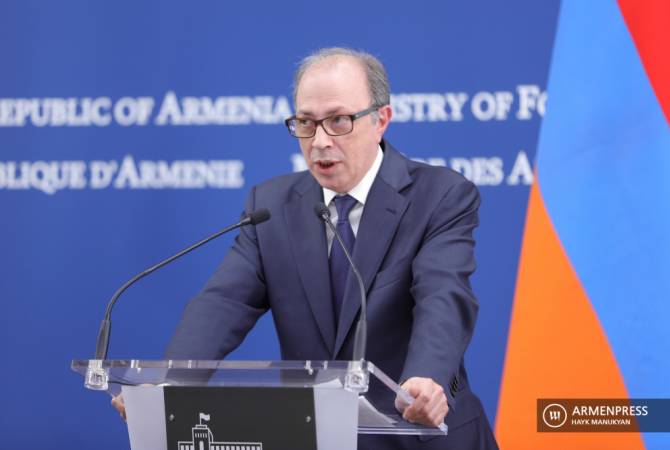 
YEREVAN, MAY 6, ARMENPRESS. Caretaker FM Ara Aivazian reiterated the Armenian stance that the Nagorno Karabakh conflict is far from being resolved.

“I once again reiterated our clear stance that the Nagorno Karabakh conflict is far from being resolved. Only through peaceful negotiations it is possible to reach a comprehensive political resolution which will take into account the rights of all and will bring peace and stability to South Caucasus,” Aivazian said at a joint press conference with Russian FM Sergey Lavrov in Yerevan. “And the basis of such resolution should first of all be the determination of Artsakh’s status within the borders where the people of Artsakh have self-determined,” he added.

Aivazian said Armenia is interested in the further strengthening and bolstering of the OSCE Minsk Group Co-chairmanship format.

Aivazian said Armenia fully agrees with the OSCE MG Co-Chairing countries’ stance which was presented in the April 13 statement noting that “special attention should be paid to the achievement of a final comprehensive and sustainable settlement on the basis of the elements and principles well-known to the sides.”

The Armenian FM emphasized that nearly 6 months after the war Azerbaijan – in violation of international humanitarian law – is disrupting the implementation of the terms of the ceasefire statement and is refusing to return all prisoners of war, including civilians.