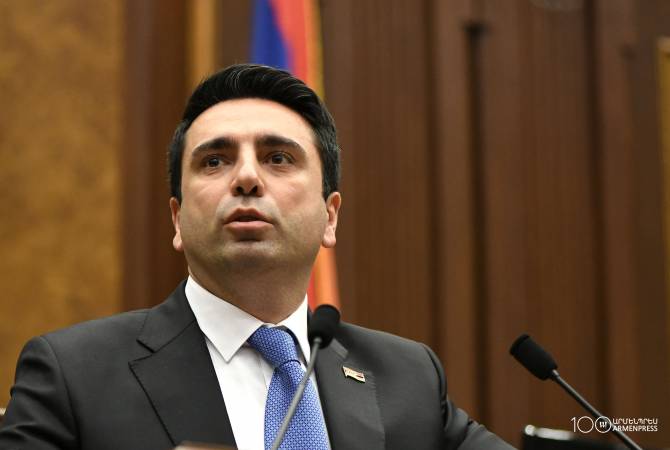 
YEREVAN, MAY 3, ARMENPRESS. The ruling My Step bloc is ready to discuss opposition Bright Armenia LHK’s draft declaration whereby signatory political forces running for parliament in the upcoming snap election will record that they will refrain from hate speech during campaigning. The LHK presented the draft declaration today, at the special session of parliament convened for the first round of vote on the way of disbanding the legislature to hold early election.

On behalf of his faction he also congratulated on the occasion of World Press Freedom Day, noting that since the 2018 revolution press freedom recorded significant growth.

Simonyan also said that as agree the My Step bloc will formally vote present in the voting to elect a prime minister – thus failing to elect, a formality required to pave way for the dissolution of parliament and snap election.

The extraordinary session of parliament kicked off for the first round of voting to elect a prime minister on May 3. Lawmakers are expected to vote down caretaker prime minister Nikol Pashinyan, who is re-nominated by the ruling My Step bloc, a formality required for dissolving parliament.

Prime Minister Nikol Pashinyan resigned on April 25 to trigger the snap polls. The entire Cabinet also resigned. Holding early elections requires the dissolution of parliament, which in turn can happen when the legislature twice fails to elect a prime minister after the incumbent steps down. Pashinyan said during his resignation that his bloc will formally nominate and subsequently vote him down during both votings in order to maintain the technical requirements to disband the legislature.