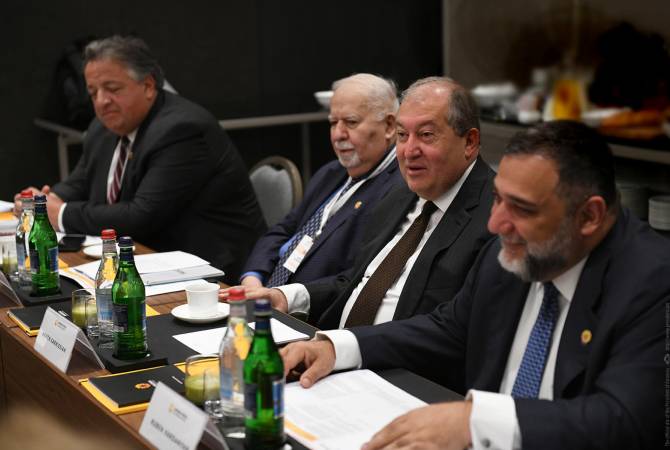 
YEREVAN, MAY 3, ARMENPRESS. President of Armenia Armen Sarkissian has sent a letter of thanks to co-founders of the Aurora Humanitarian Initiative Noubar Afeyan and Ruben Vardanyan for their efforts in the international recognition of the Armenian Genocide, the Presidential Office told Armenpress.

“On April 24 – the Armenian Genocide Remembrance Day, the heroes of the Aurora Humanitarian Initiative of the year were announced.

For the first time since its foundation, the Aurora Award was held without one of his godfathers, our old friend, co-founder of the Aurora Initiative and member of the Aurora Selection Committee, Vartan Gregorian, who passed away recently.

Once again expressing my deepest pain over the death of Vartan Gregorian, I want to thank all founders of the Aurora Initiative for participating in the fight for the recognition of the Armenian Genocide with their activity. Vartan Gregorian’s investment in that process cannot be forgotten.

He was a renowned humanitarian, scientist, researcher and advisor in national and international levels, had a key role in both preserving the Armenian identity, presenting Armenians, voicing about the Armenian Cause and raising awareness on it.

I am sure that you will continue the work which started with Vartan Gregorian with the same energy in memory of our great compatriot, his investment, fight and national activity, and of course, for the goals which he didn’t manage to complete”, the President said in his letter, adding that Mr. Gregorian has never hidden his love to the Homeland.