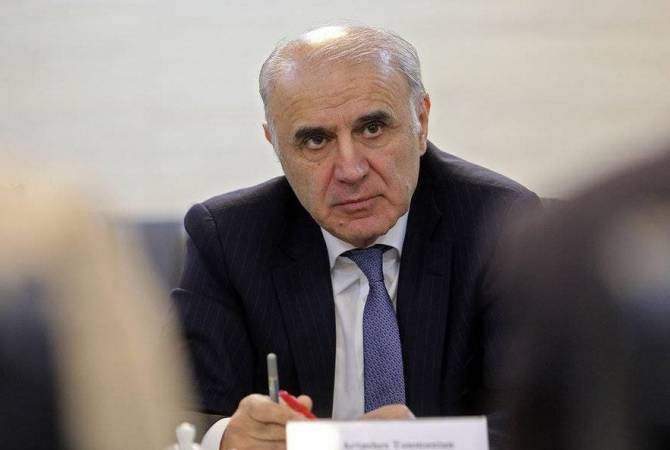 
YEREVAN, MAY 3, ARMENPRESS. Turkey’s direct and large-scale involvement in the recent war against Artsakh aimed at implementing its expansionist policy in the region, Armenia’s Ambassador to Iran Artashes Tumanyan said in an interview to ISNA news agency.

“After all these, one thing is clear: the attempt to “solving” the conflicts by use of force must be a serious signal for the international community and first of all for the countries of the region”, the Ambassador said, adding that the ceasefire stopped Azerbaijan’s military aggression, which was carried out by Turkey’s support and involvement of mercenary terrorists, and which caused huge losses to Armenian and its people.

As for overcoming the crisis, the Ambassador stated that according to the Armenian side, the OSCE Minsk Group Co-Chair countries exclusively have an international mandate for the final and comprehensive settlement of the conflict, which have come up with a proposal over the conflict settlement principles on the sidelines of the negotiation process.

As for the role of the regional countries, Mr. Tumanyan said these countries can form a favorable environment for the conflict settlement with their balanced position.

Asked whether Iran, as an important regional country, can play a positive role in the conflict settlement, the Armenian Ambassador noted that the Armenia-Iran border has always been a “bridge” of peace and cooperation, adding that any encroachment against it opposes the national security of the two countries.

“I would like to specifically highlight Iran’s key role during the war and after that, in terms of its principled stance against developments that threatened regional peace and stability. It relates to the steps (warnings, deployment of Iranian troops along the border) taken towards the inviolability of the common border and sovereignty of the two countries. The Armenia-Iran border has always been a “bridge” of peace and cooperation, and any encroachment against it contradicts to the national security of the two countries. After the recent war, there has been formed an understanding of common threats and interests both in Yerevan and Tehran. Therefore, a comprehensive strategic dialogue is necessary, the agenda of which will include both the entire complex of the bilateral mutually beneficial cooperation issues and a broad range of issues relating to the regional security and stability”, the Armenian Ambassador said.

According to him, today as well Iran’s active participation to the solution of multiple complex and problematic issues would be highly useful. In particular, he said it would be desirable to see Iran’s active influence on the authorities of Azerbaijan in the release of the Armenian prisoners of war. He also noted that currently it’s important to further intensify all components of Armenia-Iran relations which ensure the security and economic development of the two countries. In particular, he said, it’s important to “strengthen” the North-South transportation and energy corridor, deepen the cooperation in gas and energy fields, boost the trade turnover and the joint investment programs.