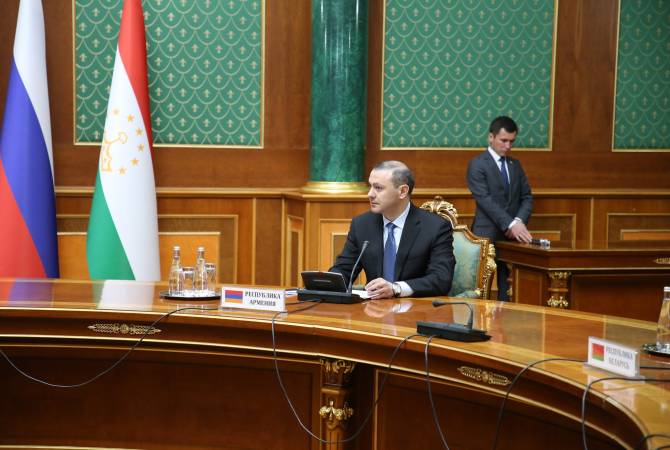 
YEREVAN, APRIL 29, ARMENPRESS. Secretary of the Security Council of Armenia Armen Grigoryan has delivered remarks at the session of the CSTO Committee of Secretaries of Security Councils in Dushanbe, Tajikistan, touching upon the security challenges and threats facing the CSTO member states, as well as the measures for eliminating them, his Office told Armenpress.

Talking about the security challenges and threats, Armen Grigoryan attached importance to the situation in the South Caucasus, stating that it remains tense and is caused by the recent aggression unleashed by Azerbaijan and Turkey against Artsakh.

Mr. Grigoryan emphasized in his speech that the recent Artsakh war has made it obvious that Nagorno Karabakh can in no way be a part of Azerbaijan.

“The war last year has vividly showed that Nagorno Karabakh can in no way be a part of Azerbaijan. We think that in the current situation the principle “remedial secession” should be applied for Artsakh, which in fact is a modern manifestation of the principle of the peoples’ right to self-determination and allows separate ethnic groups not only to separate from any state, when there are risks for discrimination, mass violations of human rights or genocide risks, but also rules out the merger with such a state”, he said, emphasizing that the principle “remedial secession” should be the basis of the concept of the Nagorno Karabakh conflict settlement.

Mr. Grigoryan in his speech has also touched upon the issue of the Armenian prisoners of war who are held captive in Azerbaijan, as well as the so-called “trophy park” in Baku, calling it as a manifestation of fascism. He highlighted taking all necessary measures by the CSTO to return the Armenian POWs.