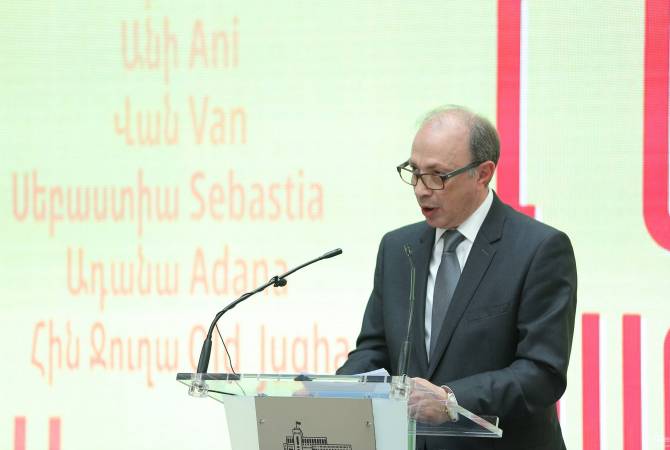 Armenpress presents the text of the minister’s speech:

Honorable Speaker of the National Assembly,

Let me first express my deep gratitude for your readiness to be here, to share our grief, and our concerns, and to support us on April 24th, amid the pandemic that has become an unprecedented challenge for all of humanity.

Today, as we commemorate the victims of the Armenian Genocide, we should remember that a significant portion of the cultural heritage created by our ancestors has also become a subject of the cultural genocide. The crime of genocide is not only the physical annihilation of a national or religious group, but also the destruction of the national culture that is an integral part of its identity - the Cultural Genocide.

The cultural genocide pursues two main goals․ The first is an attempt to tear the souls of the survivors apart, to subject them to psychological violence and the second is to erase the historical traces of the memory of the annihilated indigenous population. In other words, the cultural genocide targets memory, historical justice and human dignity.

In 1915, the deliberate, pre-planned massacres and deportations of the Armenian population in the Ottoman Empire marked the beginning of the cultural genocide, which lasted for decades. According to the official report submitted by the Republic of Armenia at the Paris Conference in 1919, 1860 churches and 229 monasteries had been destroyed. These were very preliminary and incomplete data, and during the following years this number only increased, as the cultural devastation not merely proceeded, but spread to the territories of the Republic of Armenia occupied by Turkey in 1920, including in Ani - "the city of a thousand and one churches". The destroyed cultural heritage includes tens of thousands of medieval manuscripts, cross-stones (khachkars), secular and other religious property.

Nowadays, Azerbaijan continued the traditions of Turkey in the territories forcibly evicted from Armenians. A horrifying example of Cultural Genocide is the mass destruction of the Armenian monuments in Nakhijevan, which has no parallel in the history of mankind. Nakhijevan, which carries biblical legend in its name, in 1997-2006 was subjected to a large-scale cultural massacre organized at the state level, as a result of which 28 thousand cultural objects were completely destroyed, 89 of which were medieval churches and about 6 thousand were medieval khachkars. Notably the Azerbaijani authorities first tried to change the Armenian origin of the monuments, then, not believing in their own speculations, decided to completely erase the speechless witnesses of the Armenian identity of Nakhijevan.

In 2020, 105 years after the Armenian Genocide, we once again faced a disaster planned and carried out by the same logic and methods. During and as a result of the large-scale war waged by Azerbaijan and Turkey against Artsakh, a part of the Armenian people appeared in danger of annihilation, deprivation of their homeland, and its cultural heritage was on the verge of complete destruction.

Therefore, today it is imperative for us to save the thousands of cultural, including religious monuments under the Azerbaijani control in Artsakh, especially since there are already cultural monuments targeted by the Azerbaijani armed forces, such as the Ghazanchetsots Cathedral in Shushi and Green Hour (Kanach Zham). The endangered cultural heritage includes about 1,500 cultural objects: 161 churches, about 600 khachkars, archeological sites, unique examples of secular architecture - palaces, bridges, about 19 thousand museum pieces.

The imperative of saving the spiritual and material values created by the Armenian people over the millennia has brought us here. Our cultural heritage is the result of our ancestors' sentiments, thoughts and devotion. It has been a part of our destiny, it has gone through all the stages of our national formation, historical development and losses. Even today, our ancestors speak to us through the values they have created; they bequeathed us their wisdom, their sense of beauty, their human dignity.

In order to save this cultural heritage, it is necessary to be aware, to have a clear idea of the essence of the problem, its scope and consequences.

With this exhibition, we have pursued this very goal - not only to voice our concerns, the statistics of endangered monuments, but also to present their faces, believing that the loss of these monuments will be irreversible for all of us, for the world cultural heritage.

The issue of preservation of cultural heritage in Artsakh is on the agenda of the Nagorno Karabakh issue. It is covered by international mediators, as well as many countries, UN specialized agencies and organizations. However, the official statements alone are not enough.  It is necessary to unite all efforts to prevent another cultural genocide. We should not forget that even the most protracted conflicts are temporary, but the historical-cultural heritage is eternal.

Once again I express my gratitude to everyone, and wish a substantive viewing”.