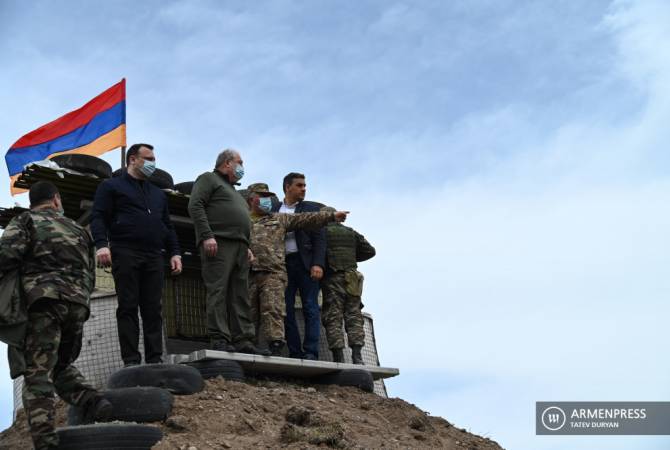 
YEREVAN, APRIL 20, ARMENPRESS. The Armenian Human Rights Defender Arman Tatoyan is calling for a “security zone” in the Province of Syunik to guarantee the protection of human rights of the Armenian citizens living in border villages.

President Armen Sarkissian and Ombudsman Arman Tatoyan are in Syunik on a “joint visit” to get to know the situation there.

In a statement released on April 20, Tatoyan said they had meetings in the Khnatsakh village, and highlighted the restoration of the rights of the villagers as a priority objective. In his words, these rights were violated as a result of “the Azerbaijani Armed Forces appearing in the direct vicinity of the village”.

“The residents of the village are unable to use their lands and gardens due to security issues, they are unable to use the grasslands and pastures. And this situation deprives them from their source of income, i.e. the rights to property, economic activity and other vitally significant social-economic rights are violated. In addition, the civilian residents’ right to life, health, physical and psychological inviolability and other internationally recognized rights are jeopardized. This situation is also contentious in terms of the interests and safety of children.”

Other issues of residents’ concern related to their rights, government support in social-economic issues after the village became a border village were discussed. The children’s rights issue was viewed, namely related to their education and the issue of attending kindergarten and school.

Afterwards, the President and the Ombudsman visited the town of Goris, where joint discussions with the mayors of Hartashen, Nerkin Khndzoresk, Karahunj, Sisian, Goris itself and other towns and villages were held.

“It is clear that the presence of servicemen of the Azerbaijani Armed Forces next to the villages of Syunik Province doesn’t have any legal basis whatsoever, it is illegal. This conclusion has concrete legal substantiations, which overall make their presence illegitimate. The Ombudsman has mentioned this numerously. The President’s stance stating that there is uncertainty in the border issue and that this situation is violating the villagers’ rights is important. Therefore, it is obvious that a security zone must be created in Syunik with the purpose of guaranteeing human rights,” the Ombudsman’s Office said, adding that the results of the visit will be discussed with the presidency for potential further actions.