Tokyo 2020: Armenia’s freestyle wrestler Vazgen Tevanyan all geared up for his first ever Olympics 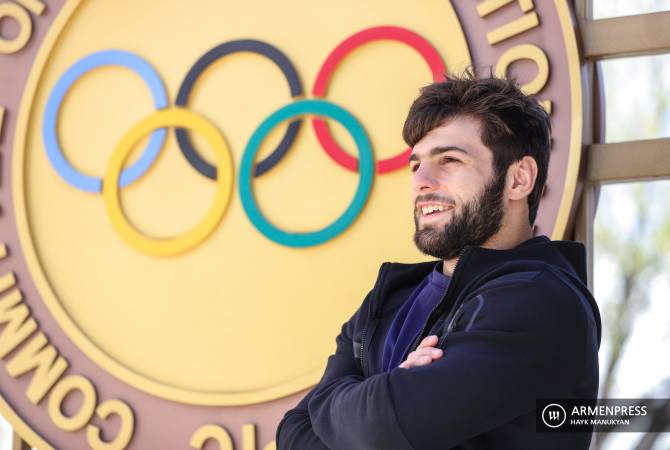 Competing at the 65kg division, Tevanyan hails from the village of Pokr Vedi in Ararat and is now considered to be one of the most promising freestyle wrestlers in Armenian sports.

The Tokyo 2020 will be Tevanyan’s first ever Olympics, and he doesn’t hide his excitement.

“First of all I am very happy that I am going to participate in the Tokyo Olympics. I am happy that I will be the one to represent my country. The Olympics are the pinnacle for any athlete,” he told ARMENPRESS’s Varvara Hayrapetyan for her Road to Dream – Tokyo 2020 exclusive.

ARMENPRESS: Vazgen, let’s talk about your opponents, who aren’t few in your weight category and are rather renowned.

Vazgen Tevanyan: There are many good athletes in my weight category. I find all of them to be serious opponents because one should never underestimate his competitors.

ARMENPRESS: Do you honestly find it realistic to snatch medals at Tokyo 2020?

Vazgen Tevanyan: Yes of course. I think a lot depends on what you believe in. I mean believing in what you are doing. You should simply believe in yourself, believe in your powers and above all train well for the Olympics.

ARMENPRESS: Our country is going through difficult times. How important do you think is success at the Olympics from this perspective?

Vazgen Tevanyan: Successful participation at the Olympics is truly important. Perhaps the medals which we’ll win will in some sense be a consolation for our nation.

ARMENPRESS: Tell us when you became interested in wrestling.

Vazgen Tevanyan: I began wrestling when I was 5. I chose freestyle at the advice of my friends and only later began to like it. My uncle, wrestler Armen Mkrtchyan, is an Olympic silver medalist and he is always giving me the right advice, we talk a lot and exchange experience.

ARMENPRESS: Before a match, do you take into account your opponent’s weaknesses or do you only count on your strong sides?

Vazgen Tevanyan: I take into account both. But taking into account your opponent’s strong sides is more important so that you can choose the right tactics.

In the athlete’s words, a source of inspiration and drive for victory is also the fact that he was named in honor of Sparapet Vazgen Sargsyan, the Armenian Prime Minister who was assassinated in the 1999 October 27 parliament attack. Vazgen Tevanyan was born on this very day.

Vazgen Tevanyan:  Yes, I was named in honor of the Sparapet, because I was born on October 27, 1999. It was my father and my uncle who made that decision [to name me Vazgen]. This is a source of inspiration for me.

ARMENPRESS: You seem very calm and balanced during your wrestling matches. How do you manage to remain so cold-hearted when you go out on the mat?