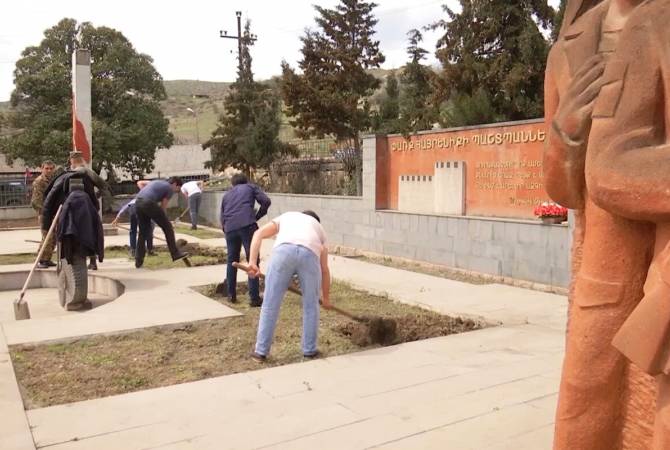 
YEREVAN, APRIL 6, ARMENPRESS. The servicemen of the Russian peacekeeping contingent in Artsakh (Nagorno Karabakh) initiated an action dedicated to the 76th anniversary of the Victory in the Great Patriotic War called Family History – the History of Victory, the Russian defense ministry reported.

The beginning of the action was initiated at the monument to 104 soldiers - natives of the village of Khanabad of the Askeran region of Nagorno Karabakh, who died in 1941-1945 on the fronts in battles against the Nazi coalition.

In addition to the campaign Family History - the History of Victory, the Humanitarian Response Center of the Russian peacekeeping contingent, in cooperation with the administrations of Mardakert, Martuni and Askeran districts, initiated work on the improvement of monuments to soldiers who went to the front from Nagorno Karabakh and died during the Great Patriotic War.

These actions, carried out with the direct participation of the servicemen of the Russian peacekeeping contingent in Nagorno Karabakh, will last until May 9 – Victory Day.

With the assistance of Russian peacekeepers, the restoration of vital engineering communications continues in the areas affected by the war.