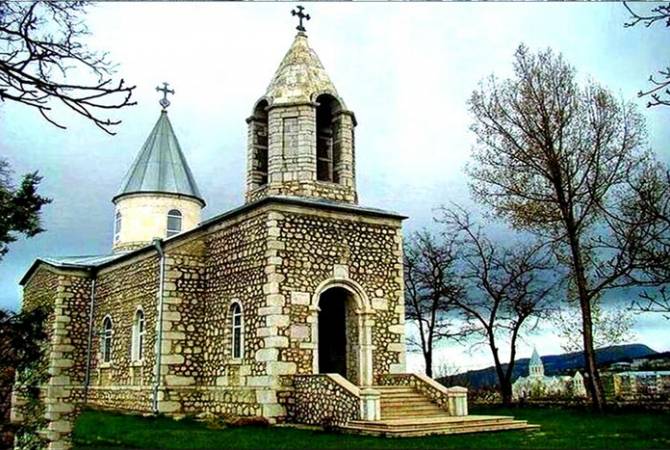 
YEREVAN, MARCH 18, ARMENPRESS. Azerbaijan’s actions against the historical-cultural monuments in the territories of Artsakh under Azerbaijani occupation is cultural genocide, Foreign Minister of Artsakh Davit Babayan told ARMENPRESS, referring to the destruction of Kanach Zham Church in Shushi by Azerbaijanis.

‘’Azerbaijanis know our history very well and the destruction of that Church is noting else but a message of the Azerbaijani president and the state that they will do the same if they are able to take control of the entire Artsakh. Those actions by Azerbaijan against the Armenian historical-cultural monuments is the continuation and the embodiment of the fascist policy in a disgusting and dangerous manner. The actions of Azerbaijanis in no way differ from the actions of terrorists in the Middle East, who destroy universal monuments’’, Babayan said, adding that the only difference is that if in the Middle East some terrorist groups are responsible for the atrocities, in the case of Azerbaijanis those actions are state-sponsored. ‘’Aliyev openly gives tasks to state bodies, for example, on the destruction of the carvings of the Armenian Church’’, the Foreign Minister of Artsakh said.

According to him, this is a contempt for international law. ‘’Naturally, we will everywhere raise the issue of Azerbaijani destruction of Armenian historical-cultural monuments, because this poses danger for also the entire civilized humanity. But the civilized world should take measures, because if they are today destroying Artsakh’s cultural heritage, in the case of remaining unpunished and the indifference of the international community, they will knock their doors tomorrow’’, Artsakh’s Foreign Minister said.

11:29, 05.19.2022
3057 views U.S. recognizes role of population of Nagorno-Karabakh in deciding its future–Ambassador Tracy’s interview to ARMENPRESS